The suspects fled the scene in a 2012 to 2019 silver Chevy Sonic with a large dent on the driver's side.
WPVI
By Rick Williams and Heather Grubola 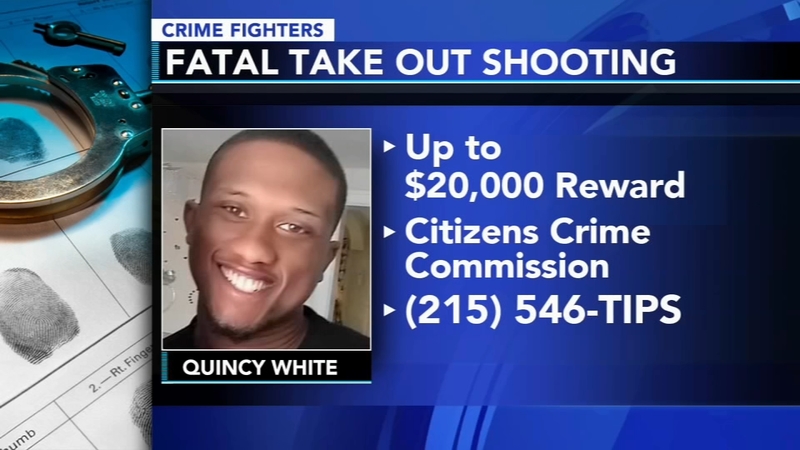 PHILADELPHIA (WPVI) -- An overnight run for food in North Philadelphia turned into a deadly encounter for a 25-year-old man.

Quincy White's mother is now pleading for help in finding her son's killer.

"Quincy was an awesome, awesome young man, very approachable. His personality lit up a room. Anyone who encountered him loved him," Madison said.

On Friday, March 13, 2020, White was at his girlfriend's house when he ran out to get something to eat.

Police were called at 12:44 a.m. for a report of a gunshot at a Chinese take-out restaurant located along the 2000 block of Ridge Avenue.

Police have released surveillance video of the incident.

"Quincy is standing at the glass, and these two guys come in. You can't tell if they said something to him, actually grabbed his arms or whatever they were doing to him," Madison said.

Police say White was shot multiple times. He made it out of the restaurant before collapsing in the street.

He was taken to the hospital where he was later pronounced dead.

One of the suspects wore a dark-colored baseball hat, a black hooded sweatshirt with light-colored writing across the chest, dark-colored sweatpants with three white vertical stripes, and multi-colored athletic shoes.

The other suspect was wearing a dark hooded jacket with red and white markings, dark pants, and white athletic shoes.

The suspects fled the scene in a 2012 to 2019 silver Chevy Sonic with a large dent on the driver's side.