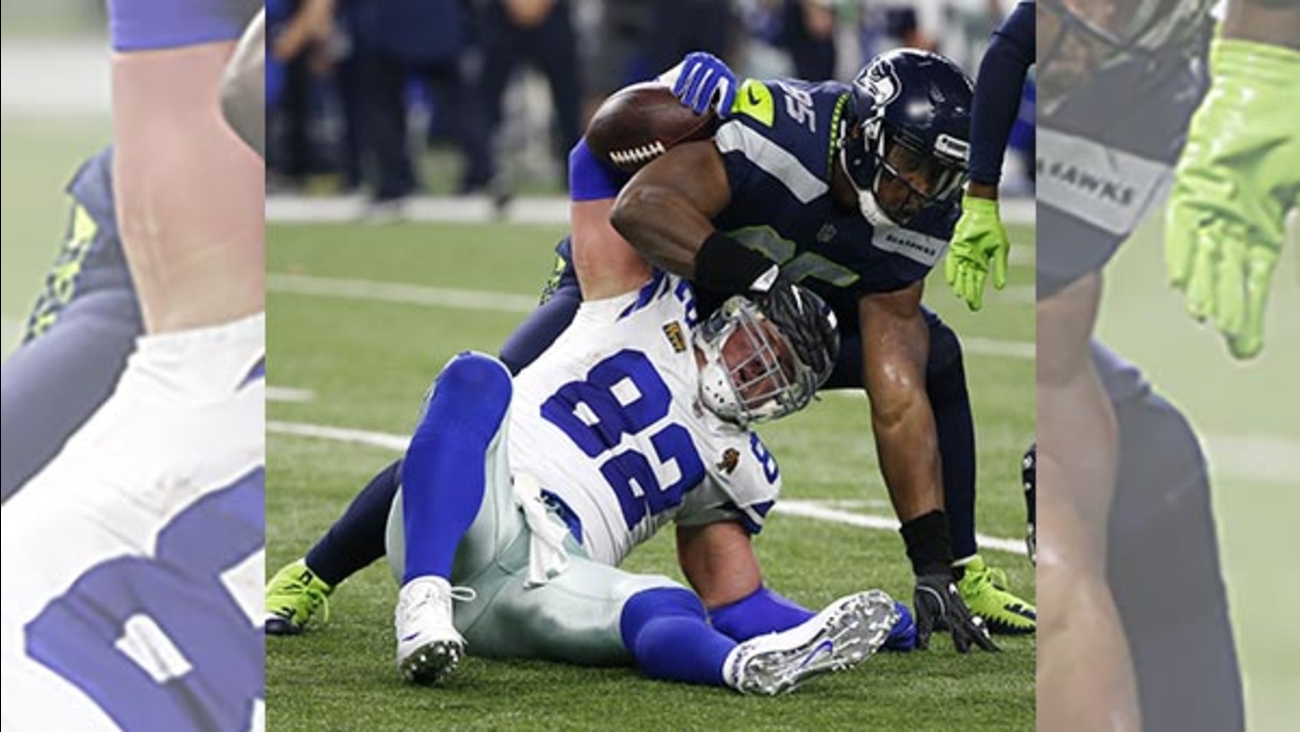 ARLINGTON, Texas -- Justin Coleman put Seattle in front for good with a 30-yard interception return for a touchdown and the Seahawks won a playoff elimination game against Dallas, beating the Cowboys 21-12 on Sunday in Ezekiel Elliott's return from a six-game suspension.

Dak Prescott threw two interceptions and the Dallas offense didn't score a touchdown despite the reunion with his backfield mate, the one he shared a remarkable rookie season with a year ago when Cowboys had an NFC-best 13 wins.

Now Dallas (8-7) is eliminated from the postseason with the end of its three-game winning streak, and the Seahawks (9-6) still have a chance to keep their five-year playoff streak alive after Russell Wilson threw for two touchdowns despite a career-low 93 yards passing.

Coleman gave Seattle a 14-9 lead in the third quarter when he reached down to catch Prescott's badly overthrown pass to Elliott and ran untouched 30 yards for a touchdown.

It was the fourth pick-six of the season for Prescott, who threw just four interceptions last season when he was the NFL Offensive Rookie of the Year. He has 13 interceptions for the season.

The Seahawks were eliminated in the NFC West race by the Los Angeles Rams' 27-23 win at Tennessee. But they can still make the postseason with some help despite gaining just 136 total yards - their fewest since getting 135 in a 14-9 win over the St. Louis Rams in 2013.

Seattle's first two offensive touchdowns were set up by pass interference penalties in the end zone. The first was a 3-yarder to Jimmy Graham, the second a 6-yarder to Doug Baldwin after running plays backed up the Seahawks both times.

The Cowboys, who lost their first three without Elliott before the winning streak, didn't take it easy on last year's NFL rushing leader after his six-week layoff, giving him 15 carries for 73 yards in the first half.

The longest carry was a 9-yarder as he averaged 4.7 per carry. Elliott finished with 97 yards on 24 carries.

But Dallas didn't give Elliott the ball with a first down at the Seattle 3 when trailing by nine points midway through the fourth quarter. After a Prescott run, a holding penalty on a pass play and the third sack of Prescott, Dan Bailey missed a 34-yarder.

Bailey, who had two 51-yarders among his four kicks, missed again in the closing seconds.

Dallas receiver Dez Bryant dropped the first pass of the game and was caught on camera on the sideline yelling at former Cowboys receiver Miles Austin, now a staff member. Soon after, he fumbled after making a catch, setting up Wilson's scoring toss to Graham.

Bryant had another ball go off his hands on a throw behind him, and the tipped ball was intercepted by K.J. Wright to wipe out one of several promising Dallas scoring chances.

Coleman repeated an Elliott antic from last season, when the Dallas running back jumped into the jumbo Salvation Army red kettle after a touchdown on Thanksgiving. Coleman got the same penalty, too - a 15-yarder for unsportsmanlike conduct.

The Seahawks had 2 yards passing at halftime thanks in part to DeMarcus Lawrence's 22-yard sack of Wilson in the first half. Lawrence overpowered Germain Ifedi, forced Wilson to backtrack after he tried scrambling to his right and tackled Wilson as he tried to run away from him at the Seattle 8.

Graham's second-quarter touchdown made him the first NFL tight end with at least 10 scoring catches in a season for two franchises. He did it three times with New Orleans and has 69 career TDs.

Cowboys: Five-time Pro Bowl LT Tyron Smith started despite a right knee injury that kept him out of practice most of the week. He came out after the first series, replaced by Byron Bell.

Seahawks: Home against Arizona next Sunday.