"It's a source of great pride to have been invited into your homes to report the news over the last three decades," Dann says. 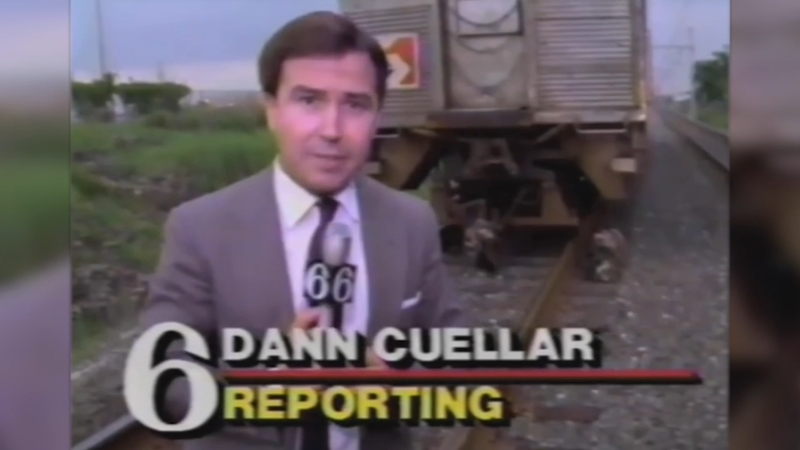 PHILADELPHIA -- Action News reporter Dann Cuellar is retiring after three decades of bringing the latest news and information to the Delaware Valley.

He became a mainstay of Action News at 11 p.m. with Jim Gardner.

Throughout his 34 years, Dann has reported on local and major news events, including the terrorist attacks in 1993 and 2001 on the World Trade Center in New York, the massacre at Columbine High School, the Waco Siege, and the Oklahoma City bombing.

Dann has also traveled the world, reporting on our troops in Bosnia, Iraq, Kuwait and Saudi Arabia.

He also covered severe weather events from snowstorms to heat waves to hurricanes.

He was there for all our favorite sports moments over the past three decades - including the Phillies 2008 World Series championship and the Eagles winning Super Bowl LII.

And Dann also became synonymous with Thanksgiving Eve when he would preview 6abc's holiday parade - dubbed the "ExtravaDannza!"

Here are just a few from over the years:

Dann Cuellar has an exclusive preview of the 6abc Dunkin' Thanksgiving Day parade.

Dann Cuellar keeps up with tradition. Here's his preview of the 6abc Dunkin' Thanksgiving Day Celebration.

Dann Cuellar gets ready for 21st parade preview. Becca Hendrickson has more on Action News at 11 p.m. on November 26, 2019.

Dann Cuellar takes us on a special behind the scenes preview of the annual 6abc/Dunkin Donuts Thanksgiving Day Parade.

Before he signed off, Dann wanted to share this message with you:

To our Action News viewers:

It's a source of great pride to have been invited into your homes to report the news over the last three decades. I don't think I could ever fully capture what an honor it has been. I've had a tremendous run here at Action News. I really have. Together with my colleagues, we traveled the world reporting on major events of our times, like being there to witness the bravery of our troops on the battlefields of Iraq, Kuwait, Saudi Arabia and Bosnia.

The 9-11 attacks in NYC, the Columbine massacre, the Waco siege, the Oklahoma City Bombing, Katrina and other hurricanes across the U.S. and so many other significant events, most recently, the horrible Covid-19 Pandemic.

But also capturing stories of true grit and heroism, including so many that touched our hearts and gave us hope for the future. And sometimes even having fun like when the Eagles won the Super Bowl and the Phillies won the World Series...and of course, our annual preview of the Thanksgiving Day Parade.

I am deeply honored to have worked with some incredible colleagues at 6abc WPVI-TV.

But now, after 34-plus years at Action News, the time has come to move on.

This is the end of a chapter and the beginning of another.

There are so many things I want to do. First and foremost, for the next few months I'll be with family, the people I love the most and the ones who enabled my career to happen.

I plan some travel and things I've been wanting to do.

Ultimately I would like to teach TV & Digital journalism at a local university. Do some charitable works in our communities. Perhaps some consulting work and maybe even write a book or two.

But right now I want to say, thank you for watching over the decades and giving me the opportunity to spend some time together and share so many events of our times. It's been an honor and a pleasure.

May we have left the world a better place than we found it.