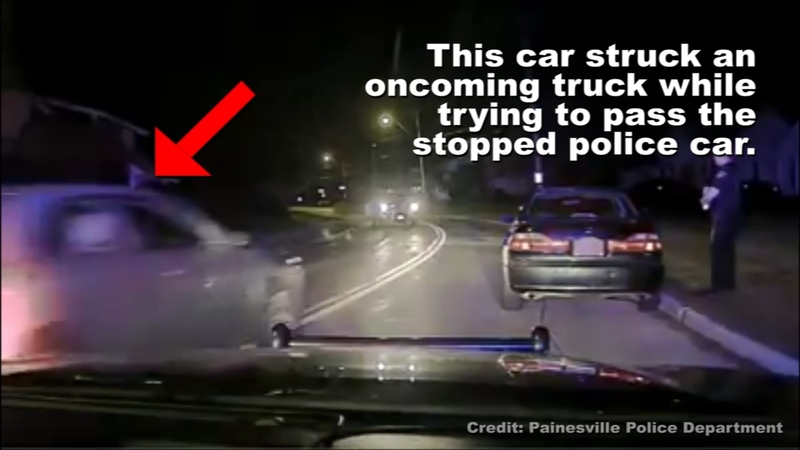 PAINESVILLE, Ohio -- A truck nearly hit a police officer and injured another when it slammed into a police cruiser during a late-night traffic stop in Ohio.

Two Painesville officers were conducting the stop July 6th at around 2:00 a.m. when a passing vehicle struck an oncoming pickup truck. The truck then veered off to the left, missing one officer and striking the patrol car head-on where another officer was seated in the patrol vehicle. The officer in the patrol car was treated and released for minor injuries at Tripoint Medical Center.

The dashcam video shows one officer alert and standing on the passenger side of the stopped vehicle during the incident, which allowed him to move out of the way and avoid injury. The force of the initial collision between the passing vehicle and the oncoming pickup truck caused the truck to strike the stopped police cruiser.

The Painesville Police Department said it is publicizing this video to give insight into the daily dangers faced by police officers across the country who work to protect their communities and deter accidents by enforcing traffic violations.

In a press release on the incident the department said, "Even with safety precautions, like using the passenger side approach, officers are vulnerable."

Painesville police also urge drivers to slow down and wait until it is clearly safe to pass when they are passing emergency vehicles engaged in a traffic stop or caring for a disabled vehicle. They advise, "Always use caution when passing and give plenty of room for the pulled over vehicle. Failing to do so can have deadly consequences for the officers and other motorists."
Report a correction or typo
Related topics:
car crashcar accidentscar accidentpolice cameradashcam videou.s. & worldtraffic stop
Copyright © 2022 WPVI-TV. All Rights Reserved.
TOP STORIES
AccuWeather: Spotty Showers Today
Officials ID 5 killed in Pottstown explosion; most were children
Official admits police made 'wrong decision' in TX shooting
Victim of elementary school attack says it could have been prevented
Police: Store owner robbed, assaulted with brick in North Philly
Dann Cuellar retires after 34 years at Action News
Another Trenton, NJ firehouse hit by gunfire
Show More
Rainy start to Memorial Day weekend at the Jersey Shore
Bank employees help kidnapped woman after she asks for loan
Massacre survivor says gunman told them: 'You're all gonna die'
4th grader 'did what she had to to survive' Uvalde shooting, aunt says
North Penn holds farewell parade for retiring superintendent
More TOP STORIES News