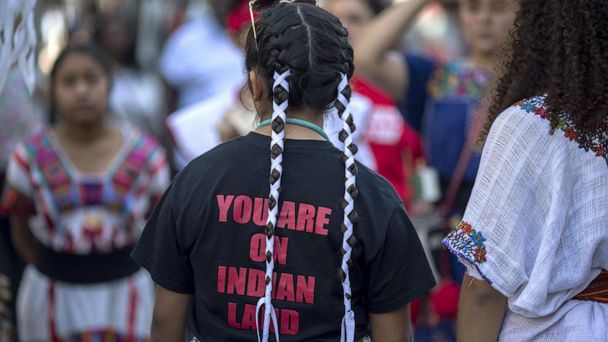 Washington, D.C., will join the list of cities and states to recognize Indigenous Peoples' Day in place of Columbus Day, after the D.C. Council passed emergency legislation on Tuesday to rename the federal holiday.

Councilmember David Grosso proposed the "Indigenous Peoples' Day Emergency Declaration Act of 2019" in an effort to "honor Indigenous People and their rich history and cultural contributions."

If signed by Mayor Muriel Bowser, the act will go into effect immediately for the Oct. 14 holiday. But for the change to become permanent, it requires congressional approval within 225 days, according to the D.C. Council website.

At least eight states and 130 cities have legally changed the holiday, including Wisconsin, where Gov. Tony Evers signed an executive order on Tuesday.

Other states are attempting to find a middle ground. Earlier this year, Oklahoma Gov. Kevin Sitt signed legislation recognizing the day as both Native Americans Day and Columbus Day.

Grosso, who's advocated for the change for the last five years, said in a statement on Monday a majority of the council has supported the idea for years, but legislation was stalled by council Chairman Phil Mendelson "without any public hearing or input."

- David Grosso (@cmdgrosso) October 8, 2019"Frankly, it's an accident of history that Columbus is honored this way in the first place. Columbus Day was officially designated as a federal holiday in 1937, despite the fact Columbus did not discover North America, despite the fact millions of people were already living in North America upon his arrival to the Americas, and despite the fact Columbus never set foot on the shores of the current United States," Grosso said Tuesday during a council meeting. "Columbus enslaved, colonized, mutilated and massacred thousands of Indigenous People in the Americas."

While Grosso was backed by nine of 11 councilmembers, Mendelson and Ward 2 Councilmember Jack Evans were present but abstained from voting.

"I fully support the establishment of Indigenous Peoples' Day, but what I don't support is eliminating Columbus Day," Evans said at the meeting. "I have gotten a number of emails, a number of calls, from constituents in my ward, largely of Italian descent, who feel that taking this action is not fair."

"We believe to repeal Columbus Day as a federal holiday, which is celebrated by over 20 million Italian Americans, only to replace it by another holiday celebrated by another ethnic group, would be culturally insensitive," the statement said.

NIAF Chair Gabriel A. Battista added: "Instead of pushing aside the contributions of Christopher Columbus and the importance he holds in immigrant, Catholic, and Italian American communities, efforts should be made to find another day or a separate, standalone opportunity to honor Indigenous Peoples."

NIAF urges the D.C. City Council to reconsider changing Columbus Day to "Indigenous Peoples' Day" in the District. The City Council has fast-tracked the legislation and will consider this bill at its meeting this morning, October 8, at 10 a.m. NIAF asks all those living in... pic.twitter.com/avdkfoaTEZ

"I hope now Chairman Mendelson will recognize the overwhelming support on the Council for this important renaming and finally hold a hearing on the permanent version of the bill," Grosso told D.C. NPR affiliate WAMU on Tuesday.