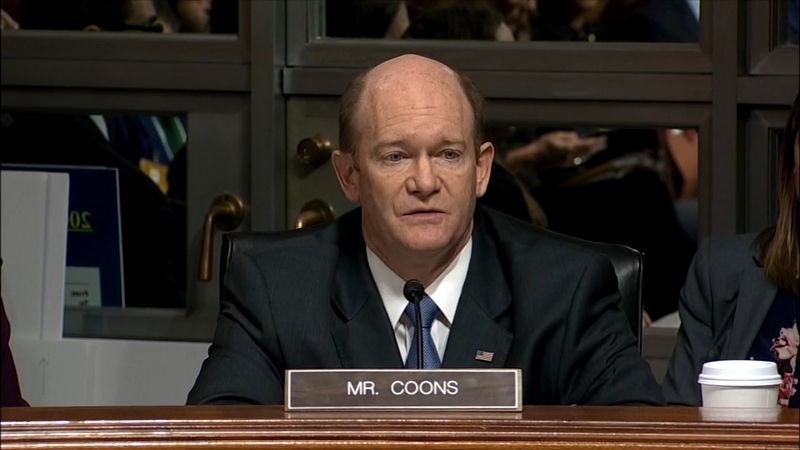 This town hall meeting was scheduled long before we knew that Friday's vote would take such a dramatic turn.

Senator Chris Coons arrived at the train station in Wilmington after a riveting vote of the Senate judiciary committee and convincing Republican Senator Jeff Flake to call for an FBI investigation into the allegations against Supreme Court Justice Nominee Brett Kavanaugh. Coons described the conversations behind closed doors.

Democratic Senator Chris Coons of Delaware said, "As it went on more and more members of the judiciary committee joined us until we literally had most of the committee squeezed into a little back hall. At one point I literally went into a phone booth with Jeff so the two of us could have a conversation without everybody else."

From there, it was on to Delaware City to a packed town hall meeting.

Julie Jackson of Wilmington, Delaware said, "At like 4 o'clock somebody said, he's having a town hall. So we got in the car."

Many people praised the senator.

Jessica Marcus of Delaware said, "You're one of the few people I think that are able to go back to their state after the performance yesterday and still hold their head up."

Several wondered if one week is enough to conduct an FBI investigation into the allegations by Dr. Christine Blasey Ford.

Louis Nicastro of Wilmington, Delaware said, "Do you sincerely believe that in one week they're going to be able to research and do everything they need to do?"

"The alternative to having one week was no weeks," said Senator Coons.

The conversation also turned to sexual assault and trauma.

One attendee said, "If this ever happened to her - I don't believe it did."

Lorraine Badley of Middletown, Delaware said, "I know what it's like to be attacked by someone. And not tell your parents. Because that happened to me."

Senator Coons added, "You spend a lifetime remembering a few aspects of your assault with enormous clarity. And most victims do not remember a remarkable array of other details."

Senator Coons is just in town for one night- and then it's back to DC. He says there's still much work to do.