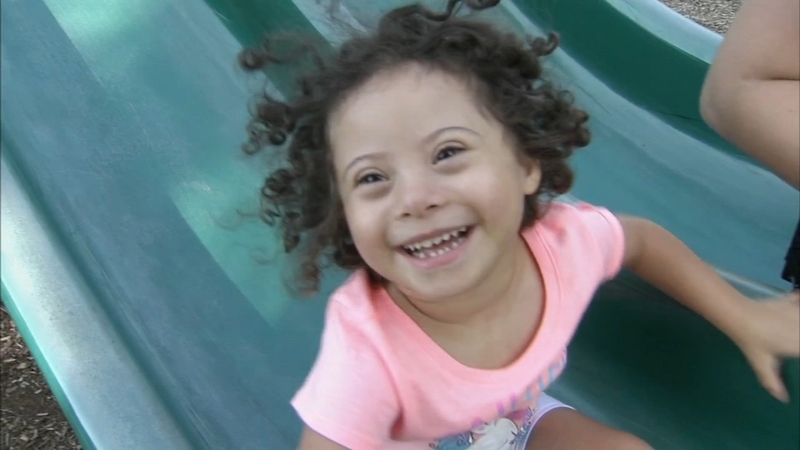 DELAWARE (WPVI) -- Next weekend, families from across the country will be in New York City for the National Down Syndrome Society's annual Buddy Walk.

Before the walk, 500 children and adults with Down Syndrome, including many from our area, will be featured on a huge billboard in Times Square.

Including an adorable three-year-old from Delaware.

Maya Grace is constantly on the move.

"She just brightens up your day and your world," says Maya's mom, Angela LaManna.

Maya is one of the 500 children, teens and adults whose photos will be part of a Times Square video presentation on September 14th.

The presentation will kick off the Buddy Walk in Central Park.

"I think we were actually fortunate to get picked this year. We had submitted previous years," Angela says.

"The picture I actually submitted this year, she had Vice President, Presidential candidate Joe Biden in it. I don't know if it helped us any, but we were lucky to get picked," Angela adds.

Sure, it will be exciting to see Maya on the big screen, but the display is about much more than that.

"It just shows about inclusion and the importance of people understanding and being aware of Down Syndrome," Angela says. "Typically it's like models or fashion magazines, but I just think that it's great that they're featuring our children."

Angela credits the movie "The Peanut Butter Falcon" for raising awareness of the abilities, not disability, of people who have Down Syndrome.

"The biggest thing is just people, and even myself, before I did a lot of research because I had a prenatal diagnosis, and I just had a lot of misconceptions and worry and fear, and she's the best thing and the most amazing thing that's ever happened to me. So to celebrate her and give her as much independence as I can, it's hard for me as she's my only child, but to give her as much independence as she can because she can just do anything," says Angela.