"I had to rep Delco from the top of the world," Roddie Cooper said.
WPVI
By Alicia Vitarelli 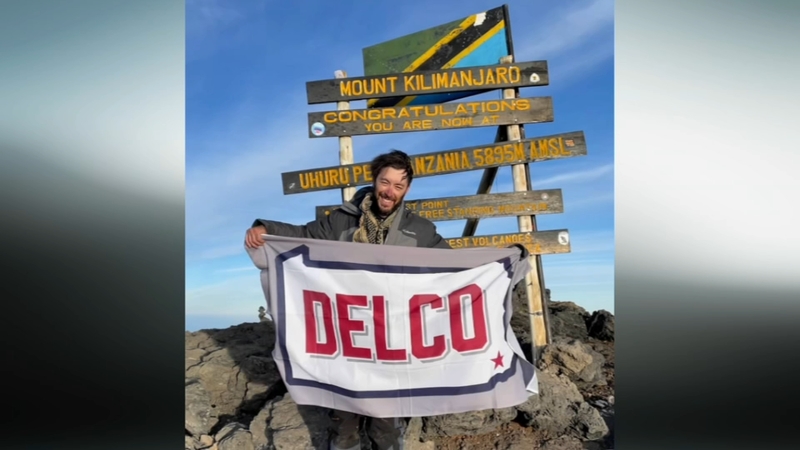 RIDLEY PARK, Pennsylvania (WPVI) -- A man from Ridley Park, Delaware County climbed nearly 20,000 feet to the top of Mount Kilimanjaro - often in temperatures below 20 degrees - for a very specific purpose.

Roddie Cooper wanted to wave a flag up at the very top, and not just any flag: the Delco flag.

"I had to rep Delco from the top of the world," Cooper says.

The owner of Olde Media Tattoo trained for this climb in Tanzania and packed the fresh flag in his bag.

It only touched the air once he reached the top.

Cooper says he was light-headed and "out of it" when the now-viral picture was taken but he says: "I did it for Delco."

"It wasn't a 'me, me, me' thing," Cooper says. "It was like a call to arms. I'd like other people to do the same kind of thing, just to show where the county can go."

Fun fact: A tattoo of the outline of the state of Pennsylvania with the word Delco and a star, placed right in the crook of his friend's armpit, once landed him the number three spot on a list of 100 of the world's worst tattoos.

"I was actually kind of proud," he says. "Some people would take offense to that, but it brought a tear to my eye."

Cooper is also a stilt walker and a Storm Trooper with the 501st Legion, making visits in costume to places like CHOP.