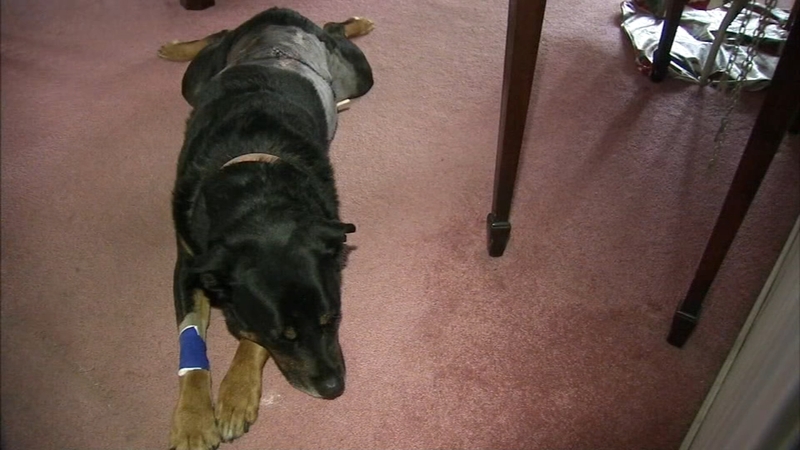 RUNNEMEDE, N.J. (WPVI) -- The search is underway for a woman who handed over some cash and left the scene after her dog attacked another dog in south Jersey.

The dog that was injured, named Duke, was treated for serious wounds, but is recovering.

Seventy-four-year-old Kathy Anderson said she was walking Duke along the softball fields in their Runnemede neighborhood when they encountered the other dog.

She said that's when that dog came charging at them.

"I walked back past the first softball field and got to the second field. I saw there was a rather large dog, it looked like maybe a pit bull," Anderson said.

Anderson said while Duke was leashed, the other dog was not.

She said, as they continued walking, the other dog suddenly came after them.

"He just pounced on Duke, put him down, and just started viciously attacking him," she said.

Anderson said she tried to break the dogs up, ending up with a small cut on her hand and a bruised leg in the process. Duke was left with a gaping wound.

She said the other dog's owner went to her car, gave her $300, and then left, possibly in a black vehicle.

"She never ever said, 'Can I help you? Are you OK?' Seeing the distress I was in," said Anderson.

Duke needed more than two dozen stitches, and Anderson was left with a $3,000 veterinary bill.

Police said, while leaving like that isn't a crime, having a dog off leash is an ordinance violation. Authorities also would have checked the dog's vaccination records and history.

Anderson said she believes the attacking dog was a large white dog with brown spots.

Anyone with information should call Runnemede Police.