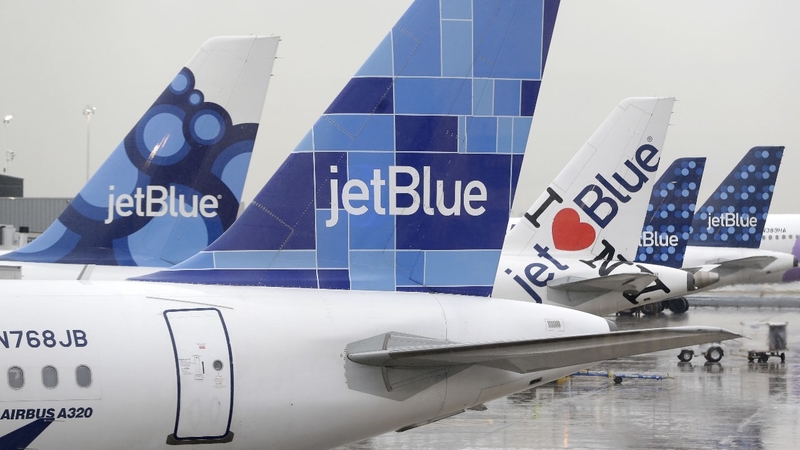 BUFFALO, New York -- A pilot was removed from a JetBlue flight in Buffalo Wednesday after police say he blew more than four times the legal limit for alcohol.

Authorities say a TSA officer at Buffalo Niagara International Airport noticed the pilot was acting drunk, and the Niagara Frontier Transportation Authority removed him from the cockpit and gave him a Breathalyzer before the plane departed for Florida.

According to police, the pilot said he was not drinking the morning of the flight but did have 7-8 drinks the night before.

They say Clifton had spent the night drinking at a bar near the hotel where he and his crew had been staying.

According to the police report, the flight's other pilot told cops Clifton missed the crew bus to the airport and had to take an Uber. While passing through security, he caught the attention of an officer and a TSA agent.

"It is so unusual as far as everyone's memory here in Buffalo, at the Buffalo airport. Really, no one can recall anything quite like this happening,"

Clifton, who is from Orlando, Florida, was taken into custody and released to JetBlue security, who notified federal authorities.

The police report also states Clifton was carrying a gun, licensed under a post-911 program that allows commercial pilots to arm themselves. Police confiscated the gun and three 17-round magazines.

"The safety of JetBlue's customers and crewmembers is our first priority," JetBlue said in a statement. "We adhere to all DOT rules and requirements concerning alcohol at all times and have a very strict zero tolerance internal alcohol policy. We are aware of the incident that occurred this morning in Buffalo and are cooperating fully with law enforcement. We are also conducting our own internal investigation. The crewmember involved has been removed from his duties."

"The airline piloting profession in North America is one of the most highly scrutinized careers, and airline pilots' professionalism has contributed to making air transportation the safest form of transport for passengers and air cargo shippers."

Meanwhile, the FAA says they are investigating the allegations:

"The FAA is investigating allegations that an airline pilot attempted to report for duty while under the influence of alcohol. The agency takes these matters seriously."

FAA drug and alcohol regulation prohibits pilots from consuming alcohol while on-duty or within eight hours of performing flight duties.

FAA regulations also prohibit pilots from flying or attempting to fly an aircraft within eight hours of consuming alcohol or if they have an alcohol concentration of 0.04 or greater.

"This couldn't be any more serious. The idea of letting anyone who's slightly impaired into a commercial cockpit with all those lives behind you and all those lives on the ground below you, it's intolerable to have any impairment whatsoever and from the point of view of a pilot, this is the end of a career," retired airline pilot John Nance said.
Report a correction or typo
Related topics:
new yorkdrunk drivingtsajetblue
Copyright © 2022 WPVI-TV. All Rights Reserved.
TOP STORIES
Uvalde school shooting: What we know about 19 kids, teacher killed
19 children, 2 adults killed by gunman in TX school shooting
Off-duty police officer killed in motorcycle crash in South Philly
NJ man, puppy recovering after vicious attack by neighbor's dog
'Many, many gunshots': Man walking dog killed in Port Richmond
Bar announces changes after fatal punch in Center City
Family identifies student stabbed at Coatesville High School
Show More
Watch Steve Kerr's raw, emotional plea after Texas shooting
How to talk to kids about Texas school shooting
Biden to sign policing order on anniversary of Floyd's death
Bicyclist struck by hit-and-run driver in East Falls
Union star surprises young fan with cleats after social media post
More TOP STORIES News