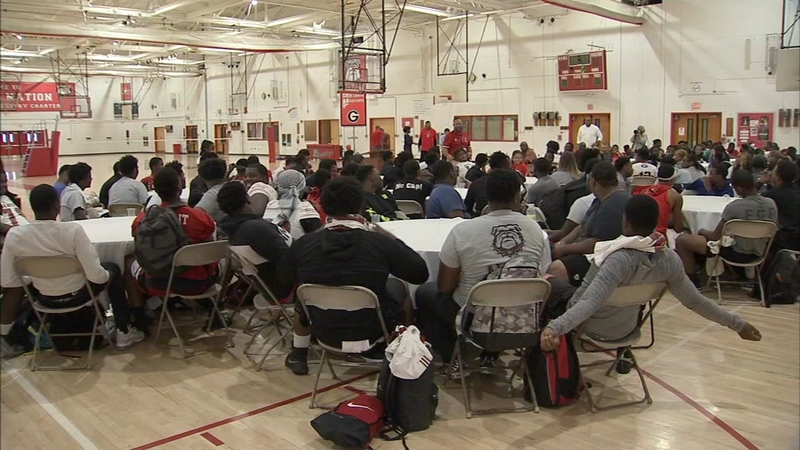 Eagles treat students to dinner after shooting at football game

PHILADELPHIA (WPVI) -- The Simon Gratz Bull Dogs were hard at work late Wednesday practicing for the next day's football game against Northeast High. But then they got a real treat.

The football players, drill team and cheerleaders were treated to an incredible dinner, courtesy of the Philadelphia Eagles.

The Eagles didn't just provide a dinner for the students, they threw a feast complete with chicken, brisket, pork and all the trimmings.

"I feel lucky and good cause we don't always have an opportunity to have a team dinner with everybody," said football player Tair Bolden.

"It's exciting cause a lot of students don't get this opportunity," said player Tyreek Nixon.

It was last Friday night during the Bulldog's football game when panicked struck. Dozens of students hurried off the field when a shooting occurred outside of the stadium in Nicetown-Tioga.

With the search for the gunman ongoing, officials stressed the shooting had nothing to do with the school or its students.

But many were left shaken and concerned for their safety. The Eagles wanted to show they care.

"It is awesome, it's awesome that the home team cares about us and it makes us feel great," said Mastery Charter Schools CEO Scott Gordon.

But it was not just a feast, there was also a dire message from CeaseFire Philadelphia about gun violence.

"Where's our future at? I don't want my children to live in a world where they have to constantly be fearful," said Colwin Williams of CeaseFire Philadelphia.

Coach Erik Zipay said the Eagles front office has been really supportive of their students.

"I feel great about it, they actually like supporting our community and helping us get things together and right for the community and stuff like that," Thomas said.
Report a correction or typo
Related topics:
philadelphia newsaction news sportshigh schoolshootingphiladelphia eaglesstudents
Copyright © 2021 WPVI-TV. All Rights Reserved.
More Videos
From CNN Newsource affiliates
TOP STORIES