WPVI
CENTER CITY (WPVI) -- Wheel of Fortune will have some Philadelphia flavor later this season.

Pat Sajak and Vanna White are in town filming segments for the show and they say they've gotten a real taste of the city so far.

Wednesday night, the duo were at Independence Mall.

They've been making stops all over the city preparing for a special Philadelphia week on Wheel of Fortune.

A small crowd gathered outside Ralph's Italian Restaurant watching as big trucks with lots of equipment lined the street.

"I knew they were coming because they put flyers in the doors," said South Philadelphia resident, Celia Freeman.

Freeman had the heads up that "Wheel of Fortune" stars Pat Sajak and Vanna White would be visiting the restaurant. She's lived her whole life in the neighborhood.

"I'm just waiting to see the celebrities because I watch them on TV and I said, maybe I could catch a glimpse," said Freeman.

The crew from "Wheel" is making stops at a lot of Philadelphia establishments.

"We are going to have a Philadelphia week so everyone tuning in to watch can get a real feel for what its like to be in the city," said Vanna White.

The City of Brotherly Love has been a special part of the game's story.

"The biggest market when we first started was Philadelphia so we have real soft spot in our heart for the folks in Philly," said Pat Sajak.

For fans of the show, getting to see the stars was fun, but just another day in the neighborhood.

"I'll go home to do my laundry and the normal things," said Freeman.

An air date has not been announced, but Philadelphia week of Wheel of Fortune will air in this upcoming season. 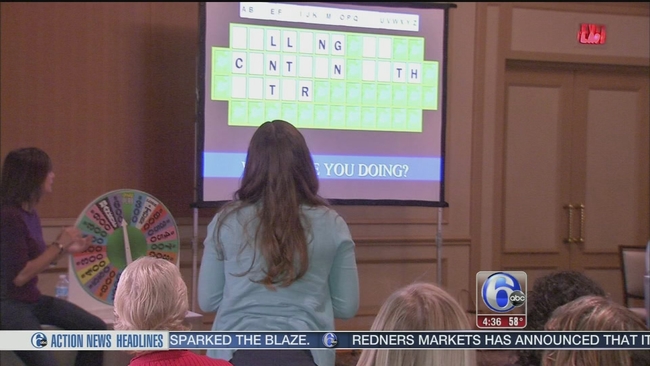