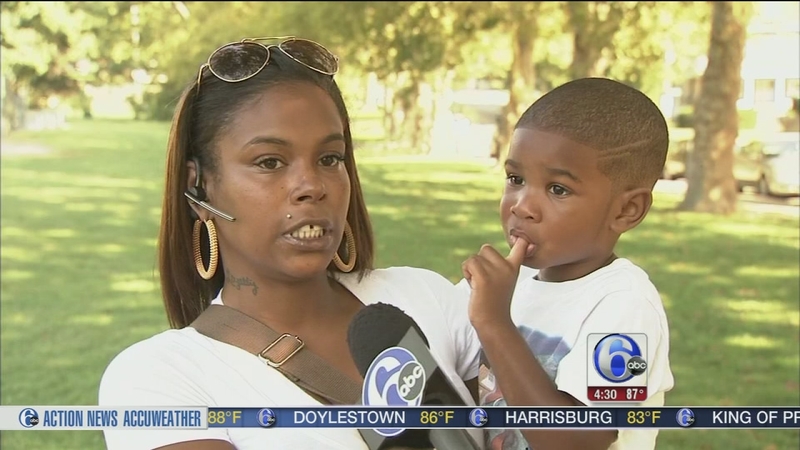 WILMINGTON, Del. (WPVI) -- A mom from Wilmington, Delaware said her son's daycare left the boy behind at a park last week, and it was the actions of a Good Samaritan that got the boy back where he belonged.

Niyesha Griffin said it happened at the Brandywine Park on Thursday, August 28th. She said her 3-year-old, Jeremiah, was with other children from Sharon Temple Daycare.

But, when other children lined up to leave, Jeremiah was left behind.

"Jeremiah got out of line and they left him," Griffin said.

Griffin says she only found out her son had been left in the park when another daycare mother contacted her on Facebook earlier this week.

"As soon as they found out my son was not in their care, they should have called me," she said.

After contacting the daycare, she found out Jeremiah's father was told that he had been missing for about 10 minutes that day. He didn't mention it to her, believing their son was missing for only 10 minutes.

The daycare gave her an incident report stating the incident happened between 11:30 and 11:45 a.m.

However, the entire incident may have lasted more than an hour.

Griffin believes her son was left in the park around 11:00 a.m. and played with other children until the park cleared. That's when a woman, in the park with her own child, realized Jeremiah was unsupervised and took him to a crossing guard.

"They sat outside for 15 minutes, she said, to see if anyone would come back to get him. No one did. So they went inside the school and contacted the police," said Griffin.

Griffin contacted the Division of Child Care Licensing and believes that workers at the daycare need training.

Griffin says daycare staff did apologize. Meanwhile, Griffin wants to find the woman who looked out for Jeremiah, to thank her.

"She kept my child safe and I appreciate that, because he could have been out here with anybody and they could have took my baby," said Griffin.

Griffin has taken her son out of the daycare.

A spokesperson for the State Office of Child Care Licensing confirms they have investigated and substantiated her complaint. Sharon Temple Daycare has been placed on Warning of Probation for 6 months.