Grieving mother reminds consumers to anchor their TVs to the wall 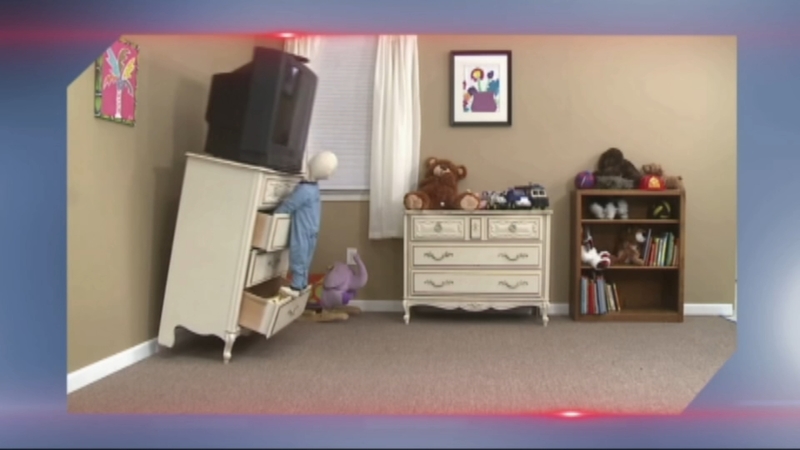 PHILADELPHIA (WPVI) -- Federal safety officials have an urgent warning about anchoring your television and other furniture. It comes after a newly released report on tip-over injuries and deaths.

The report shows that since 2000, nearly 500 children have died as a result of tip-overs, and the majority, 71% of those fatalities, involved a television.

"I now have an almost 2-year-old son who will never know who his sister is," she said.

Santiago's daughter, Janiya, died after a television fell on her when she was 3 years old and crawled out of bed and into the next room.

"The next thing I know, I heard the TV coming down. So I immediately picked this huge TV up and just threw it," she said.

"And since 2000, that meant 580 deaths, four out of five of which are children," said CPSC Chair Alexander Hoehn-Saric. "Most of them involve televisions, and there's something you can do about it."

The CPSC is urging consumers to anchor televisions, furniture, and appliances to the wall. Some come with kits to do that, and you can buy inexpensive, easy-to-do kits any time at your hardware store.

"These kits come in less than $20 and can be installed in under 20 minutes," he said.

The CPSC's campaign, AnchorIt! is now in its 7th year. From 2011 to 2020, there has been a 55% decrease in all emergency department treated tip-over injuries.

The Consumer Product Safety Commission is also moving forward with a mandatory rule on the stability of dressers and storage units.