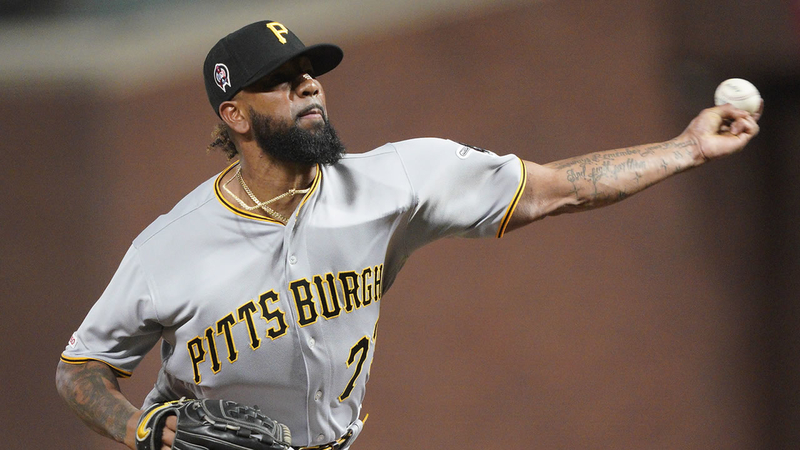 PITTSBURGH -- Police have arrested Pittsburgh Pirates pitcher Felipe Vázquez for solicitation of a child following an investigation into a reported sexual relationship with a 13-year-old girl.

Florida Department of Law Enforcement agents arrested the 28-year-old for one count of computer pornography -- solicitation of a child -- and one count of providing obscene material to minors.

Vázquez was taken into custody in Pittsburgh on Tuesday morning on a felony warrant out of Lee County, Florida.

The investigation started in August 2019 after agents received information that Vázquez had a reported sexual relationship with a 13-year-old girl who lives in Lee County, police say.

Police say the victim, now 15, continued to have a relationship with Vázquez via text messages and she reportedly received a video from him in July in which he is shown "performing a sex act."

Florida police say Vázquez also sent the victim text messages suggesting they would meet for sex after the baseball season was over.

A search warrant was served Tuesday at Vazquez's apartment in which several electronic devices were seized.

He was taken to the Allegheny County Jail, where he's facing extradition to Lee County.

"Today we were made aware of an active law enforcement investigation involving Felipe Vázquez and his subsequent arrest. We take this matter, and these charges in particular, extremely seriously. We have informed the Commissioner's Office of the investigation and arrest. The Commissioner's Office will immediately place Felipe Vázquez on Administrative Leave (and, as a result, Restricted List) pursuant to the Joint MLB/MLBPA Policy. We need to be respectful to all involved and the ongoing legal proceeding. As a result, the organization, our staff and players cannot comment any further at this time."
Report a correction or typo
Related topics:
sportsarrestchildrenpittsburgh piratesbaseballathletessolicitationu.s. & worldsex crimes
Copyright © 2022 WPVI-TV. All Rights Reserved.
TOP STORIES
1 dead, 4 injured after driver crashes into utility pole in Montco
AccuWeather: Clipper system to bring snow showers to parts of region
Fire on roof sends smoke billowing over Center City
Fauci optimistic omicron will peak in February
5 tax changes that can boost your refund this year
Former CHOP patient becomes nurse at new King of Prussia hospital
Woman says someone followed her in Center City using Apple AirTag
Show More
Family demands justice after 23-year-old woman found dead after date
How to order your free COVID tests from the government
How a 73-year-old grandmother outwitted a scam artist
FBI issues new warning on QR codes
After the omicron wave, what's next for the COVID pandemic?
More TOP STORIES News