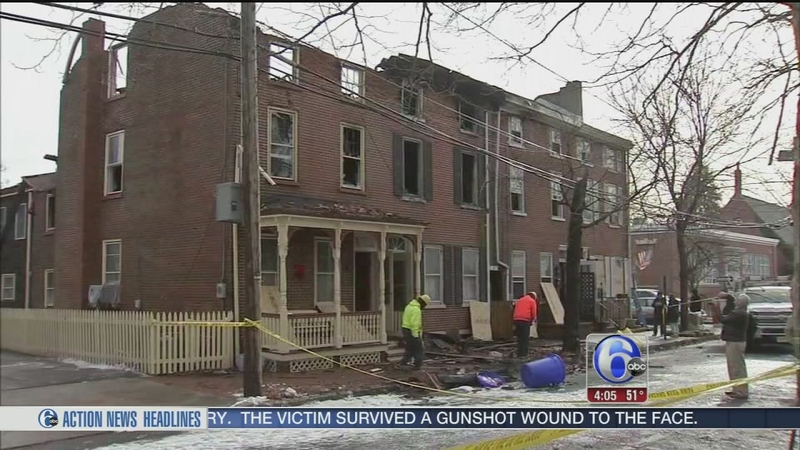 BURLINGTON, N.J. (WPVI) -- Almost two dozen people are out of their homes because of a massive fire that ripped through a block of row homes in South Jersey on Friday.

The blaze was so large it even forced a nearby school to close for the day.

Roof timbers, estimated to be 100 years old or older, fueled the intense flames from a four house row of homes in the historic river town.

With no modern firebreaks the blaze spread along attics and did major damage.

William Johnson was asleep in unit 313 next door to where it's believed the fire started.

Johnson grabbed his family and got out.

The two alarm fire burned for about two hours. Remarkably, though 20 people were displaced and being assisted by the Red Cross, there were no serious injuries.

The roof of the building collapsed in the fire, so a structural engineer was called in. So far it is thought the structure is too unstable for investigators to go inside to search for the cause of the fire.

Frank Caruso from the Office of Emergency Management says, "The fire investigator will have to take a look once he can get inside. The buildings are still unsafe so we are going to have to wait."

In the chaos of the fire several pets went missing. Among them was 6-year-old Roxy the cat who was later discovered by firefighter in an upstairs closet of Stephanie Millers mother's long time home.

Miller explains, "They found her (the cat) and she survived the whole thing, through everything - the fire, the smoke."

Stephanie says she sometimes stays at the house with her mom, Bonnie.

Miller's home sustained the least damage of the four. Stephanie is thankful for the neighbor who alerted her mom.

"He came knocking on the door, and my mom happened to fall asleep downstairs on the couch and was right by the door, thanks God, and she got out," she said.

There has been no official announcement as to what happens next, though there is apparently talk of demolishing the two most damaged and unstable structures. As for the other two units, the hope is they may be repaired.