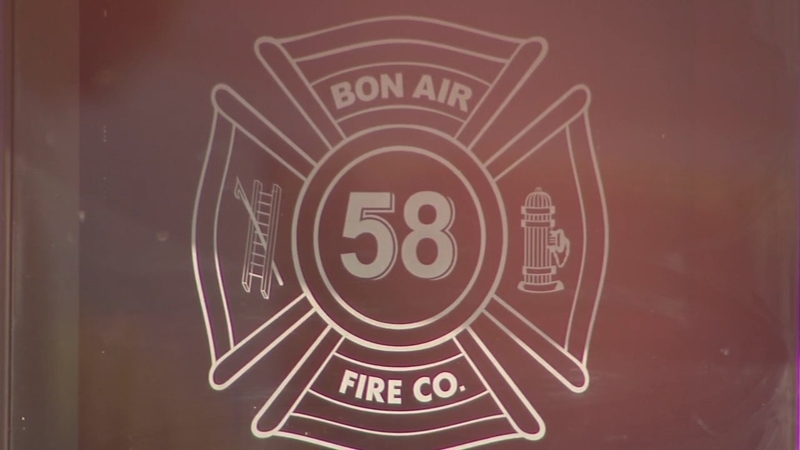 Fire company says Haverford Twp. was wrong to shut them down

HAVERFORD TOWNSHIP, Pennsylvania (WPVI) -- A Delaware County fire company says their township was wrong in shutting them down after they refused to terminate a volunteer firefighter who had attended meetings of a controversial organization. That organization, the Proud Boys, is also speaking out.

Township officials learned last month that a volunteer fireman with the Bon Air Fire Company in Haverford Township tried to join the Proud Boys, an organization the Southern Poverty Law Center has recognized as a hate group.

On Wednesday, township officials removed the fire trucks and equipment from the station.

The Bon Air Fire Company issued a statement on Thursday in response to the township's actions.

Bon Air Fire Company shut down as reported by George Solis during Action News at 11 on September 4, 2019.

"In closing the Fire Company, the Township failed to identify a single instance in which that volunteer's services to the Haverford community were negatively influenced in any way by his brief association with the outside organization," the statement read.

The fire company said they conducted their own investigation once they found out about the volunteer's interactions with the organization. They said it was a difficult process that required much introspection.

The fire company said they were treating the volunteer as they would any other Haverford Township citizen - "fairly and equally."

They said the investigation revealed that "the volunteer is not now, nor ever was, a member of the outside organization."

"Some of the bedrock rights we all share as American citizens are the rights to freely assemble and to freely associate with others. Unfortunately, our beliefs in those constitutional rights are sometimes tested when the groups in question espouse beliefs in which we do not agree," the statement said.

On Friday, the Proud Boys issued a statement to Action News saying, in part, "Personally, we're shocked at the ignorance and irresponsibility of Haverford Township. The heroic service fire departments provide simply cannot be overstated. In no uncertain terms they save lives. Firefighters put their lives on the line to protect the community and pulling them out of service puts that community at risk. Such a decision should be made cautiously and with a recognition of the stakes involved. But that's not what happened. This foolish decision was made by ignorant, misinformed politicians who based their opinion on a fallacy that equivocates a conservative drinking club that supports President Trump, with some kind of hate group."

According to the Bon Air Fire Company's statement, the volunteer attended some social gatherings with the Proud Boys, but once he learned more about their beliefs he stopped his interactions with them. They said he never attended any rallies or protests and disassociated himself with the group more than a year ago.

"He has broken no law and committed no crime," the statement read.

The fire company said the volunteer never made any statements or posted any social media messages in support of the group or "which reflect poorly on his ability to faithfully carry out the duties of his position to the Haverford Community."

Fire service for Bon Air will be provided by four other companies in Haverford Township: Brookline Llanerch, Manoa and Oakmont.

"The Township's decision to close the Fire Company is wrong and harmful to the community. As a result of its decision, there are now 37 fewer well trained active crew members available to fight fires in our community and three fewer fire trucks available to be dispatched to alarms," the statement said.

Statement from the Proud Boys:

Personally, we're shocked at the ignorance and irresponsibility of Haverford Township. The heroic service fire departments provide simply cannot be overstated. In no uncertain terms they save lives. Fire fighters put their lives on the line to protect the community and pulling them out of service puts that community at risk. Such a decision should be made cautiously and with a recognition of the stakes involved. But that's not what happened. This foolish decision was made by ignorant, misinformed politicians who based their opinion on a fallacy that equivocates a conservative drinking club that supports President Trump, with some kind of hate group. The accusation made by the township against us was vague and inarticulate. And alarmingly, all this was done at the behest of a terrorist organization, Antifa.

A misconception needs to be cleared up regarding this story. There was no "anonymous tip". The fire fighter, Bon Air Fire Department, and Haverford Township were the victims of a targeted harassment campaign. The fire fighter was doxed by antifa, who then flooded the Township with harassing phone calls. It is a form of terrorism used by Antifa whereby they disrupt and harass their target until their demands are met. Usually this is brushed off by reasonable managers who recognize the implications of giving in to such an absurd demand, but occasionally, they find a gullible coward who caves and fires their employee. In this extreme case, the entire department was dissolved when the fire fighter's mangers rightly found no cause to dismiss him.

Remarkable as this event is, it should not be treated as a singular incident in a vacuum. This is simply one instance in a growing trend of political division in this country. This isn't about Bon Air or the Proud Boys, this is about picking sides in a political war. People impugn our motives, slander and assault us as a way of attacking Donald Trump by proxy. The unholy alliance of Antifa terrorists, dishonest left-wing media, and corrupt government that assails our members does the same thing to anyone in a MAGA hat. This is the toxic state of political discourse in 2019, and the media is as much to blame as Haverford Township. The question now is: Are you going to treat people with whom you may disagree politically with fairness and dignity? Or are you going to contribute to the bifurcation of our culture by slandering them?

The choice is yours.

The Philadelphia Chapter of the Proud Boys

Statement from the Haverford Township Manager: 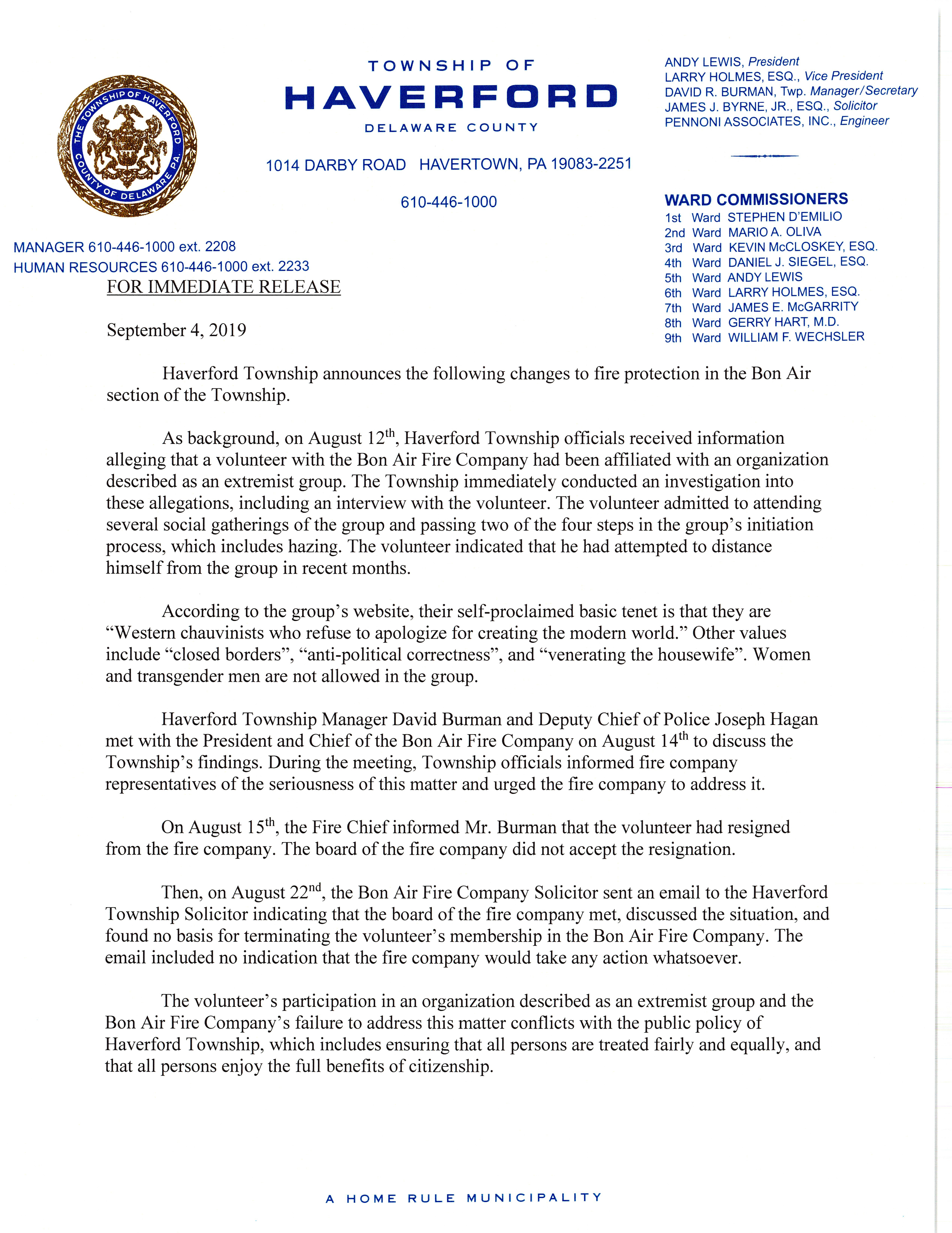 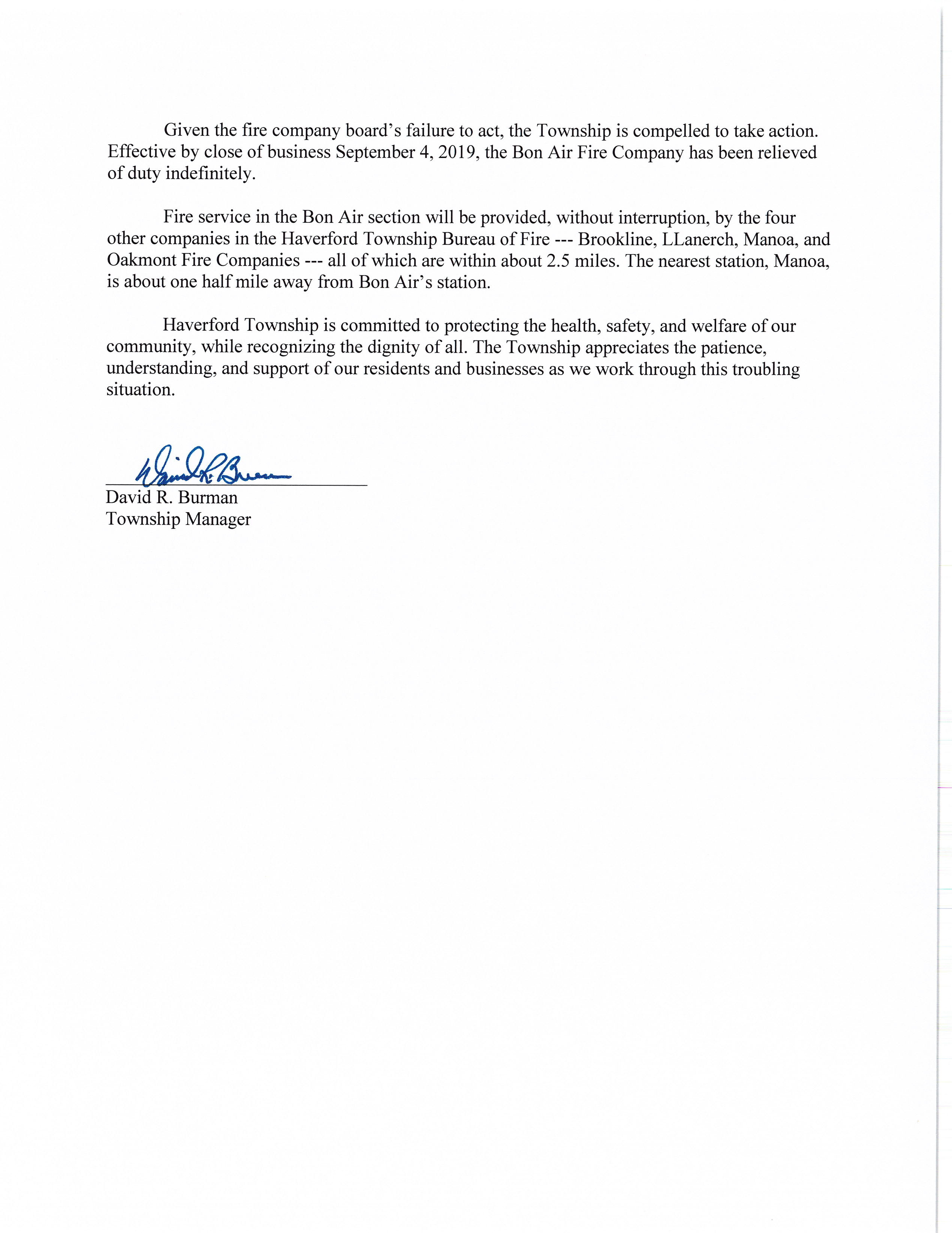