Husband and wife dead, 2 others injured in Torresdale house fire 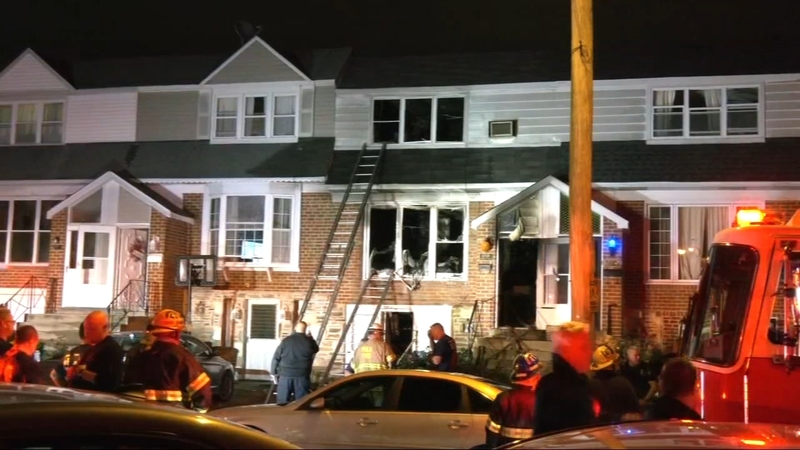 PHILADELPHIA (WPVI) -- Two people, a husband and wife, died during a fire that broke out in a home in Northeast Philadelphia Monday night.

The fire started shortly before midnight in a two-story home on Modena Place near Harrow Road in the city's Torresdale section.

Arriving firefighters were met with heavy smoke and flames.

Police sources tell Action News that a husband and wife, ages 68 and 78, were found on the first floor of the home.

Neighbors said the couple had lived here for years and that they were very active in a local church.

"They're a very, very nice couple. It's just a shame to see," said Jim Micoletti of Torresdale.

Their daughter and son-in-law, both 46-years-old, were taken to Jefferson Torresdale Hospital with burns and smoke inhalation. They are in stable condition.

Witnesses said the daughter and son-in-law were outside of the house, screaming that the two others were still inside.

"She was screaming, trying to get everybody's attention. It was pretty bad," said Micoletti.

Neighbors tried to get into the home, but there was too much smoke and fire.

"Just heard screams for help, and that's when my husband, my son went over, and we were trying to break the windows. We were throwing things through the window," described neighbor Deneen Senske.

Neighbor Alex Polyakov said he and another man attempted to get in through the door.

"We just came in there and tried to save them but the smoke was too much, there was too much heat, you know CO2 in the air," Polyakov recounted.

He added, "When I was in the army, they taught us not to leave the fallen body behind."

Firefighters were able to get the fire under control quickly.

"Our thoughts and prayers go out to the family that is affected by this," Thiel added. "The neighborhood here is obviously a very tight-knit community, and it's a sad day for us."