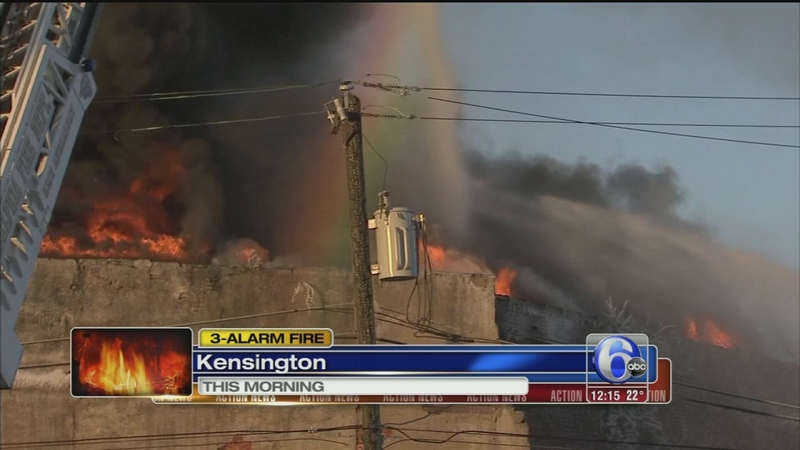 KENSINGTON (WPVI) -- A large fire at a commercial building in Kensington shut down service on SEPTA's Market-Frankford line for hours Tuesday morning.

Firefighters were still pouring water on the building at noon, nearly 7 hours after the blaze broke out, and more than 3 hours after it was declared under control at 8:30 a.m.

The situation quickly became one of fire and ice at the scene, as firefighters battled the elements along with the raging flames.

The water they poured onto the fire quickly froze, and getting enough water also became a problem.

Many of the fire hydrants in the area were frozen solid. Firefighters had to hunt for usable hydrants and then run a lot of hose.

"In that situation we look for multiple hydrants," said Fire Commissioner Derrick Sawyer. "One of the things we do a good job of - we have hydrant inspections every year. So we know where all the hydrants are. So we'll just switch to another hydrant."

The fire wasn't a direct threat to the El, but it was close enough that firefighters had SEPTA shut down El service in the area fearing the heavy water spray might cause a short circuit.

It is running through the area now, but the York Dauphin Station remains closed.

The fire broke out in a Rainbow clothing store next to a Payless shoe store. They have been destroyed and a nearby building has also suffered heavy damage.

Apartments above the stores were unoccupied. No one was injured despite the thick coating of ice on the streets surrounding the fire scene.

Firefighters were given warming breaks throughout the morning.

"Thanks to SEPTA," Sawyer said. "They provided a bus for rest and rehab. We were rotating out members to stay warm. And we had the Second Alarmers out here to help us out with hot chocolate, coffee, soup to help us stay warm."

Firefighters battling the blaze did so right next door to a grim reminder of how dangerous their jobs can be.

An empty lot next to Tuesday morning's fire scene is the former site of an abandoned factory that went up in flames three years ago, killing two Philadelphia firefighters.

Lieutenant Robert Neary and Daniel Sweeney were killed when one of the walls of the building collapsed on them.