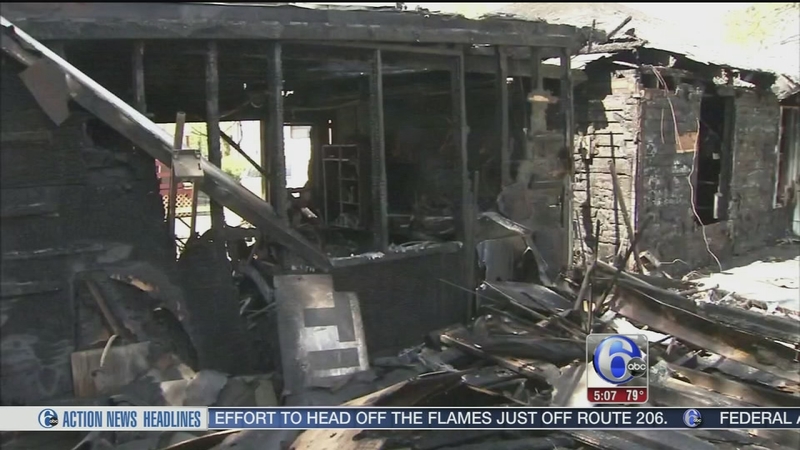 HAMILTON TWP., N.J. (WPVI) -- Dozens of firefighters are still recovering after being sickened while battling a blaze in Hamilton Township.

On Wednesday afternoon on South Broad Street, a backyard fire raged, consuming two garages, a workshop and a shed.

It was all recorded by passerby Damian Armenante.

A container of chlorine for homeowner Karin Weaver's pool was inside the shed where the fire was roaring.

She was on the way to Newark Airport when police called to tell her about the fire.

"He said 'when the firefighters hit it with the water the chlorine went into the air and now we have a hazmat situation,'" Weaver said.

The chlorine sickened some first responders.

In all, 45 firefighters, police officers, and EMTs were taken to area hospitals to be checked out.

"Like a bad sore throat at first and then my chest just kind of felt like, not on fire, but it was a burning sensation in my chest," Gribbin said.

"Right away you could smell it. It was definitely chlorine so we just evacuated everybody from the area," Groveville Fire Chief Mark Antozzeski said.

Five people were treated and released including a firefighter who suffered facial burns from hot roof tar.

Karin Weaver says she feels terrible about the firefighters who were injured, but she's grateful for the effort they made and the way they selflessly put themselves in harm's way.

"I can't say enough about all the first responders, but I just felt so responsible for all of them that I just started saying prayers for them. I can't thank them enough," Weaver said.

The cause of the blaze is under investigation by multiple agencies.