The surge in demand is lifting fares by about $15 to $20 on a $200 ticket in the second quarter of this year.
CNNWire
By Chris Isidore, CNN Business 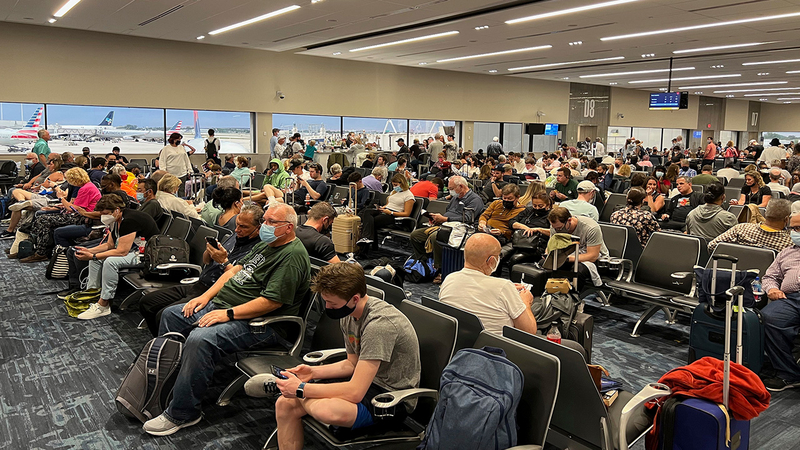 Jet fuel prices are soaring along with other fuel costs. So are airfares.

Blame the return of passenger demand - rather than fuel prices - if you pay more for a flight this spring or summer.

The nation's leading airline executives appeared at a JPMorgan investor conference Tuesday and all spoke of the much stronger demand for air travel than they had been expecting only months ago. Delta and American both said they had record days for passengers bookings last week.

"We're seeing an increase in demand that is really unprecedented," said Delta president Glen Hauenstein. "I have never seen ... demand turn on so quickly as it has after Omicron."

The surge in demand is lifting fares by about $15 to $20 on a $200 ticket in the second quarter of this year. That represents about an 8% to 10% increase above what Delta had previously planned on charging for fares.

Experts say the reason is not cut and dry, they also say more than one thing is causing prices to rise.

"It's really been the strong demand and better pricing environment ... (that has) allowed us to more than offset the fuel cost," Hauenstein said.

Fuel is the second largest expense for airlines, behind labor costs, making up 20% to 25% of operating expenses. Other than Southwest, most carriers do not have long-term fuel contracts, known as fuel hedges, to shield them from spikes in fuel prices.

The three largest US airlines - American, United and Delta - warned investors Tuesday that the average price for a gallon of jet fuel will jump between 17% and 33% in the current quarter compared to the last three months of 2021, and between 47% and 72% over what they paid a year ago.

The last two years proved that airlines can't simply raise fares to cover costs, as the US airline industry collectively lost tens of billions of dollars as demand for air travel plunged. Despite leisure travel demand coming back last summer, US airlines all reported losses for the year.

This year's demand should be enough to return the industry to profitability for the first time since 2019, as the increase in passengers allows airlines to raise ticket prices.

"Even with this strong traffic, the airlines can't recapture all the higher fuel cost, particularly if they go up quickly," he said.

Airlines started raising fares long before the war in Ukraine pushed oil prices higher. They saw strong bookings in early 2022 as the Omicron variant subsided, and decided there was enough demand to support fare hikes.

"When you think about pricing, that's more of a function about what will customers pay," said Tammy Romo, chief financial officer at Southwest. Despite the lower costs from its long-term fuel contracts, Southwest instituted a systemwide fare increase on Feb. 1, weeks before Russia's invasion of Ukraine sent fuel prices soaring.

Airlines also limited the number of their least expensive seats earlier in the year in anticipation of strong summer bookings.

"We didn't pre-sell the summer at lower (fares), we saved the seats and are now selling them at much higher (fares) and we're happy about that," said Andrew Nocella, chief commercial officer for United.

Most airlines are still operating fewer flights on domestic routes than they did pre-pandemic. Staffing shortages and some delays getting new planes delivered mean that airlines are offering less capacity than the market might otherwise bear.

"We already have planes that are as full now as March 2019," said Willis Orlando, senior flight expert for Scott's Cheap Flights, a booking site.

Gas station owners in Burnsville, North Carolina said they wanted to help people out, so they took a loss and dropped their prices to $2.25 a gallon.

The consumer price index shows that airfares are up about 13% in February compared to a year prior, but that's still down 16% from where they stood in February 2020, before the pandemic decimated demand for air travel.

Part of the reason fares have not returned to pre-pandemic levels is that while domestic leisure travel is close to where it was in 2019, business travel and much of international travel, two segments that are the most lucrative, are far from a full recovery.

As Covid-related restrictions are removed, international travel could be close to 2019 levels by later this year, he added.

"There's huge pent-up demand for international travel," Parker said. "When will every country say it's OK to travel without Covid restrictions? I can't say that. It won't be this summer. But I certainly believe it will be done by year's end."