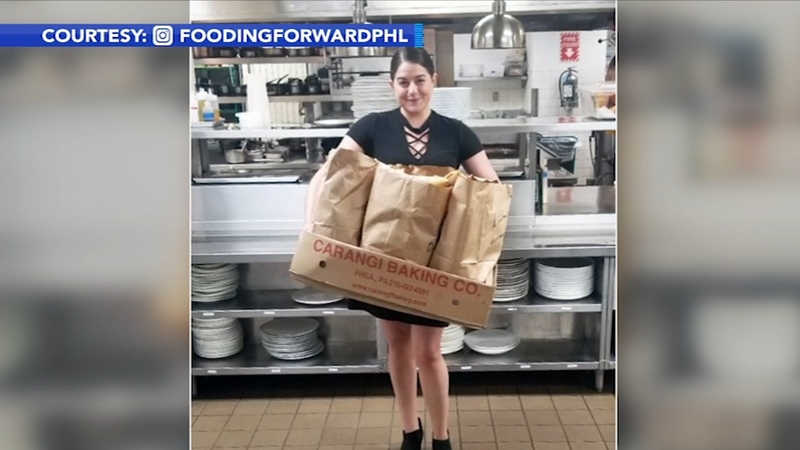 PHILADELPHIA (WPVI) -- Every night, when restaurants and hotels all around our area close up shop, they're left with good, edible, leftover food that they can't store or reuse.

This, as people around the region go hungry.

Connecting the two was a challenge, but one local woman figured out how to get that fresh, excess food to those in need.

"I was walking through the kitchen and found a trash can filled with dinner rolls," said Abbe Stern. "I lost it. I said, 'why did we throw this away?'"

An operations and event manager at the Rittenhouse Hotel, Stern stern calls that her "a-ha" moment.

"This was good food," she said. "It did not need to be thrown away."

With so many eateries with excess food, and so many hungry people to feed, Stern started Fooding Forward. She calls herself the translator between the two.

"There's food to be rescued and there are rescuers in the space, they just don't talk to each other," she explained.

At sister restaurants Goldie and Dizengoff in Center City, there's always leftover, homemade pita. Now, it has a home.

"Instead of putting this bread in the trash, we can now put them in these bags to be given to somebody the next day," says Emma Richards, the General Manager at Goldie. "Just because somebody has to use some kind of service in order to get something to eat, doesn't mean they should be given food that isn't good."

Working out the coordination turned out to be complicated.

Stern started out doing the drop-offs herself. She now partners with Evan Ehlers from Sharing Excess, who set up a delivery route.

"It's a win-win situation," Ehlers says. "These businesses are throwing out food. They actually have to call a dumpster to come pick it up if we don't pick it up."

Ehlers started the non-profit while still a student at Drexel University.

"Usually when I approach a restaurant they say, 'Great, I have been looking for something like this for a long time'," he said.