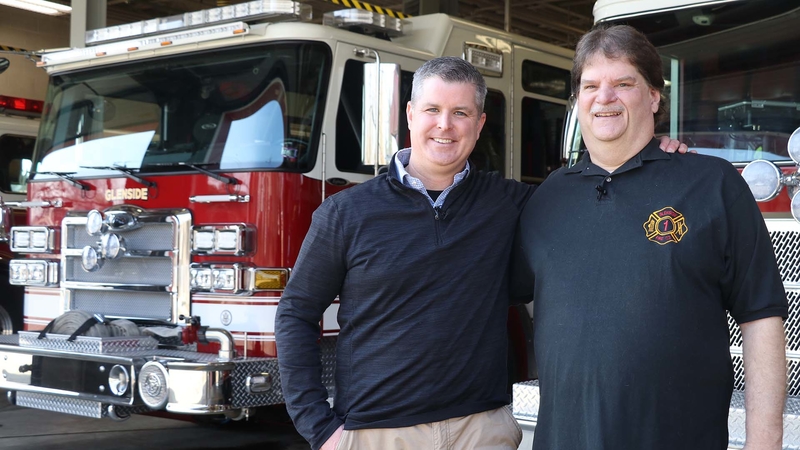 GLENSIDE, Pennsylvania (WPVI) -- "I think there's a population of people out there that are called to serve, I do," said Brendan Dougherty. "Whether you're a firefighter, any kind of first responder."

Dougherty added 'living organ donor' to that list back in 2018 when his friend, James Woods, was suffering from kidney failure. Both men were volunteer firefighters with Glenside Fire Company #1 but never imagined sharing a bond like this.

"I've known Jim for my whole adult life," said Dougherty. "For the majority of that time, he was living with some struggles related to his kidney function. And he never ever spoke of it."

Woods said he lost friends when he first needed a kidney transplant in 2001. Fortunately, his sister stepped up to the plate and gave the gift of life. His new organ chugged along for roughly 16 years before it started to fail.

And this time, he didn't want to ask for help.

"I can honestly say I've never asked anybody for a kidney," he said. "I've asked them to register to be a donor. I don't care who for."

That message reached Dougherty when a friend created a facebook campaign to find a donor for Woods.

Dougherty knew the chances of matching were low. In fact, he thought a kidney exchange might be more likely. In that scenario, Dougherty would donate his kidney to a stranger, who would then donate theirs to Woods. But they had something else coming for them.

"To my shock, when they told me I was actually a match, I was floored," said Dougherty.

The team at Einstein Healthcare Network successfully completed a transplant on March 2, 2018. Four years later, both men remain close friends and continue to celebrate their success story. They also hope to spread the word and encourage others to consider becoming living organ donors.

"I know it's helped him, but I think what has taken years for me to realize is, I'm better off for it," said Dougherty. "I'm healthier. My outlook in life has completely changed. He's done just as much for me that I've done for him."

They root for different teams, but these two Marine Corps veterans share a bond that extends beyond the football field.