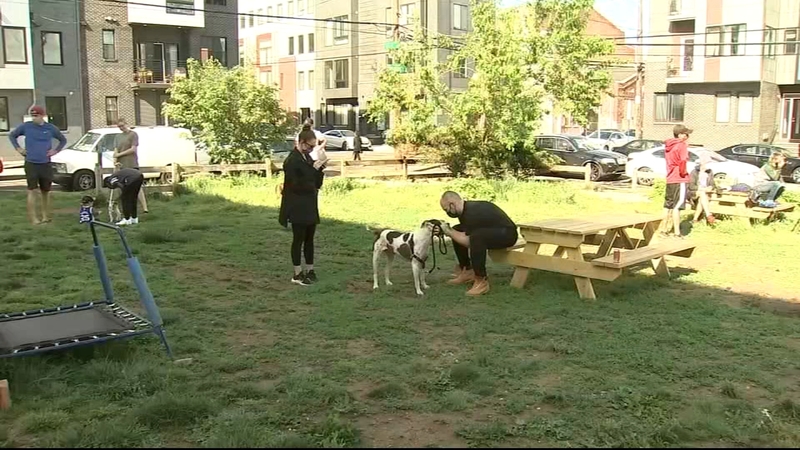 PHILADELPHIA (WPVI) -- A North Philadelphia community is expressing frustration after being told to vacate a piece of city land that residents helped to revitalize.

What residents once described as a dumping site at 15th and Parrish streets in Francisville has been transformed into a community green space after a major clean-up effort during the pandemic.

"My sons and I come here about twice a day for about an hour each day," said resident Michael Schieber.

The city tells Action News that this vacant lot has been improperly used for parking, a dog park and for other uses.

NOTICE TO VACATE! What residents once described as a dumping site at 15th & Parrish has been transformed to a community green space, after they did a major clean up during the pandemic. The lot, though, is owned by the City, who says it being improperly used. @6abc pic.twitter.com/QSkS4zSjQB

"When these types of events occur on Philadelphia Redevelopment Authority (PRA) parcels, significant liability and insurance issues can arise for the PRA as owner of the parcel," the city said in a statement.

But the residents disagree.

"Coming together and working on this together is not a liability. And if it is, the city should be working with us, not against us to turn it into a park. Or a least hear the community out," said Ashley Knueppel.

For neighbor Paul Donovan, the frustration is, "All of a sudden the city is interested in the lot. For 10 years it's been sitting empty, collecting trash."

With their own money, residents built a sandpit for kids, picnic tables and a fenced-in area for dogs.

Over 1,000 people have signed a petition to keep the lot a green space.

The city says by next week, everything must be moved out. The land is currently set aside for future affordable housing.

Residents used their own money to clean up the lot and transform it with picnic tables, sand box, etc. The city says these actions create liability and insurance issues. Residents have collected almost 1000 signatures to keep the space green. @6abc https://t.co/EryScyVhXa pic.twitter.com/sVnW7k90BL

"We support any type of affordable housing. We need more throughout the city, but this is one of the only larger green spaces left in the entire neighborhood," said resident Joe Deutschmann. "Once we lose this last large green space in the neighborhood, there's no getting a green space like this back."

Read the full statement released by the city:

"The subject parcel(s) has been improperly used for parking, a dog park and for other uses by the neighbors in the area.

Please note that these actions were taking without the permission or authorization of the PRA. When these types of events occur on PRA parcels, significant liability and insurance issues can arise for the PRA as owner of the parcel. Additionally, parking on the parcel is prohibited by the City's Zoning Code. These are the reasons the PRA took immediate action when we became aware of the unlawful entry by posting signs to notify the community of the ramifications of any unlawful entry or use.

More importantly, please also note that this parcel is currently identified and set aside for a future affordable housing development/project. The request for proposals ("RFP") will likely be issued and posted on our website within the next six (6) months seeking qualified developers to develop the site. The need for affordable housing is a serious concern and need for Philadelphia and its residents. Building affordable housing is a priority of the City and PHDC (including PRA).

With respect to maintenance of the parcel, the PRA has a contract with the Pennsylvania Horticultural Society for such maintenance. Any issues of trash and illegal dumping can be reported to info@phdc.phila.gov."