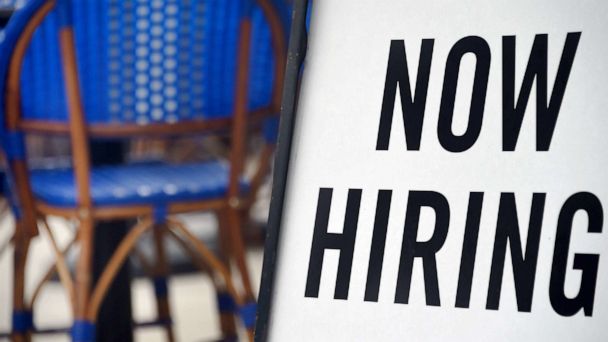 Two sets of data released Thursday by the government paint different pictures of an economy entrenched in the middle of the coronavirus crisis.

Third-quarter GDP grew at a record 33.1% annualized rate, indicating the economy significantly clawed back losses over the past three months. The massive gains come as "efforts continued to reopen businesses and resume activities that were postponed or restricted due to COVID-19," the Commerce Department said.

The explosive growth, however, comes on the heels of a record-setting drop in Q2 GDP.

Economists warn that the fresh data should be looked at in context.

"The rebound in Q3 GDP must be viewed in the context of the expectation that the full year will likely still see a contraction, once the final figures are in," Mark Hamrick, senior economic analyst at Bankrate, said in a statement to ABC News. "The rise occurs off the base of a smaller economy after the historic Q2 contraction."

He went on, "There's a high level of uncertainty associated with growth in the current quarter, including the risk that consumers opt to spend more time in their homes, and less money out and about, in the coming weeks to avoid the virus. Growth remains lower than where it ended 2019, which means it isn't yet time to hang the mission accomplished banner."

White House Chief of Staff Mark Meadows reacted to the news on FOX Business Thursday morning, saying American people "can rejoice in this number this morning."

"That is probably twice as much as the largest GDP growth that we've ever seen," Meadows said.

On Wednesday, Joe Biden's deputy campaign manager, Kate Bedingfield, noted in a memo that "Trump's 'mission accomplished' rhetoric does not capture the true direction or state of the U.S. economy."

"Most important, the American people will see through the sham, because they are living with the economic consequences of the president's failures," she added.

Separately, the Labor Department said Thursday that another 751,000 people filed for unemployment insurance last week, showing the new layoffs are persisting. Moreover, the DOL said some 22.6 million people were still receiving some sort of unemployment benefits through all programs.

While the layoffs have trickled down significantly since peaking at 6.9 million in late March, they still remain at historical highs.

"The fact that claims have significantly improved from the worst parts of the crisis, while still extremely elevated at three times that of pre-crisis levels, is a daunting reality that suggests layoffs continue to ripple through the economy," he added.
Report a correction or typo
Related topics:
abc newsnational
Copyright © 2020 ABC News Internet Ventures.
More Videos
From CNN Newsource affiliates
TOP STORIES