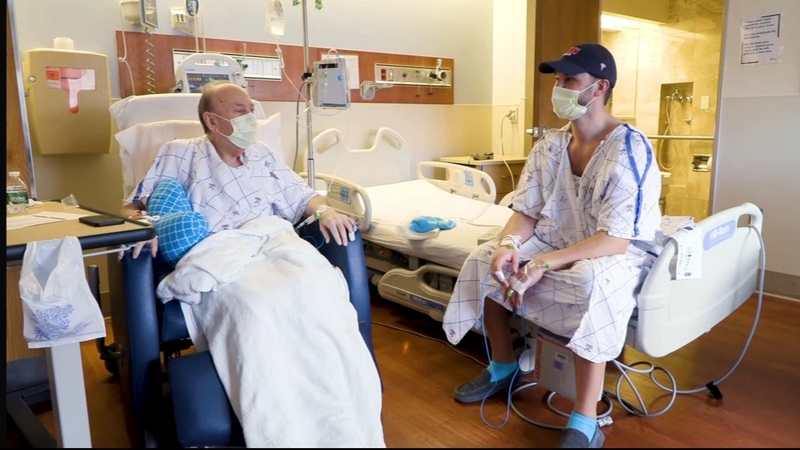 PHILADELPHIA (WPVI) -- A Berks County, Pennsylvania man received the gift of life, not once but twice. Transplant surgeons at Penn Medicine said it all came together in a way they have never seen before.

Henry gets choked up talking about the call he got from family friend Jason Hornberger on his 72nd birthday. Hornberger told him he was going to donate his kidney to Henry.

"I've known Dick my entire life," said Hornberger. "He's an auctioneer. He's too humble to say this, but he does a lot of charitable work for the community. If anyone is deserving, it's Dick."

But what's even more extraordinary is that these two have been down this road before at Penn: in hospital gowns, hooked up to IVs.

Nearly five years ago, Hornberger donated part of his liver to Henry after he was diagnosed with a non-alcoholic form of liver disease.

Hornberger was already involved with the Gift of Life. His wife Amanda lost her mother Tammy when she was just 11 years old. Her family donated her mother's organs.

For Hornberger, this was a way of helping a friend in need and honoring his mother-in-law.

At Penn, it was a first for a patient to donate two organs to the same recipient.

Dr. Robert Redfield, the surgical director of the living donor kidney program at Penn, said Hornberger is a lifesaver.

"Mr. Henry was older in age, if he weren't able to find a living donor, I am not sure he would have survived to wait for a deceased donor," he said.

Hornberger and Henry hope their story will inspire others.

"My story is a positive one, I had a positive outcome. The surgery went extremely well. Maybe there's more people who will feel more comfortable about becoming a donor moving forward," said Hornberger.

"I think if people really knew how much it really means to a recipient to get a new lease on life, they might step up to the plate," said Henry.

Dr. Redfield said from a health standpoint, the liver regenerates, so Hornberger's had already grown back by the time he donated his kidney.