The cast had to rely on each other through the emotional roller coaster of filming the episodes centered on police brutality.
OTRC
By Andrea Lans 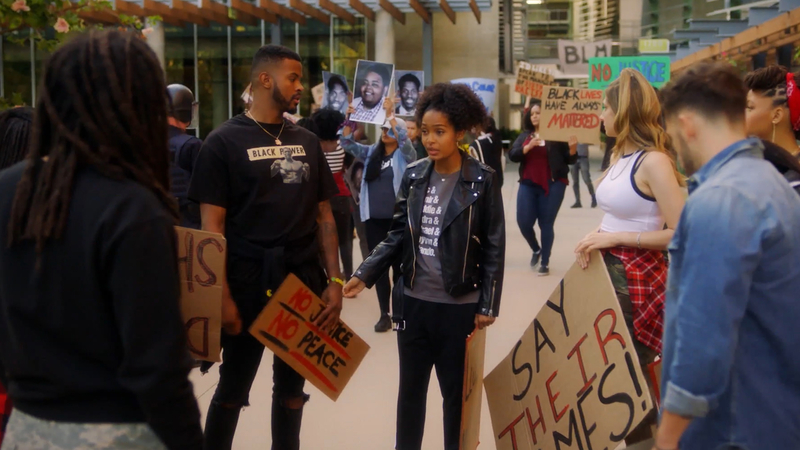 "Grown-ish" has a reputation for tackling social issues through the lens of college students, sometimes addressing injustices with humor and even costume parties. But the show's fourth season is hitting even closer to home with topics that have been top of mind, including police brutality, white fragility, Black Lives Matter protests, social media activism and looting.

Beginning Thursday, August 5, a "grown-ish" two-week event will follow the students at Cal U as they react to the news of an unarmed Black man being shot by police. While the cast agreed they were grateful to be incorporating these storylines, everyone had a tough time shooting such heavy subject matter.

"It definitely opened up scars that haven't fully been healed and I just remember being on set, kind of being an emotional wreck," Chloe Bailey (Jazz) said.

Trevor Jackson (Aaron) admitted he was teary-eyed the whole time while filming the episodes: "Being a young Black man in the industry who doesn't have to deal with as much because of my status or things like that, it was just very reflective for me."

Things got even more emotional on set as life imitated art in a tragic manner. While filming these episodes, Jackson recalled hearing the news that another Black person had been murdered. And, this all happened as the nation watched Derek Chauvin's trial for killing George Floyd.

"The day that Derek Chauvin got convicted, we all had to film a scene of us watching another murder," Francia Raisa (Ana) said. "It was the heaviest day and scene."

Raisa added that the whole cast and crew took a moment of silence together after filming that scene. Bailey called the experience "healing" and "oddly therapeutic."

"I think everyone in the cast did a really great job of creating space for one another," Yara Shahidi (Zoey) said. "Whether we talk about it or go through how heavy that feeling was, together without shame."

Hopefully, that feeling translates into a powerful message onscreen.

"We can only hope that people receive it the way that we did when we got to approach it," Diggy Simmons (Doug) said.

"It's definitely going to really hit some people at home," Jackson added.