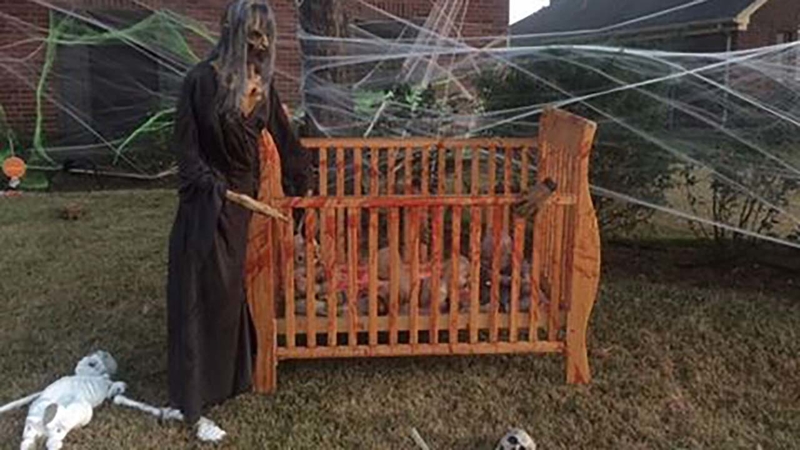 KATY, TX -- How far is too far when it comes to Halloween decorations? One mother says a display outside a home in Katy, Texas is too much for the neighborhood children.

That display--zombie babies with beady, red eyes sitting in a blood-splattered crib with a zombie mother looking on--had neighbors talking, but in the homeowners' defense.

"It's supposed to be a scary kind of deal. It's Halloween," said Danny Juarez. "I don't find it offensive at all."

"I think they're cool. It's more different than the normal ones you see," 13-year-old Charles Mechura said.

At least one person was offended.

Thursday a mother wrote to our sister station, KTRK in Houston, saying: "Halloween decorations are going too far, young children should not be exposed to this while walking around the neighborhood."

Greg Pagans looks at the display from across the street everyday.

"I'm completely fine with it. It's their yard. They pay taxes on that yard. It's hard to keep everybody happy," Pagans said.

Eyewitness News spoke to the homeowner about the creepy decorations. She and her husband have three boys -- ages 8-months, 4 and 10. She says they like to have fun with Halloween and, with a wink and a smile, insisted the zombie babies are well cared for. She declined an interview because she doesn't want the attention.

"You can see they're plastic and not real. You don't see bloody babies roaming around, normally," added Mechura.