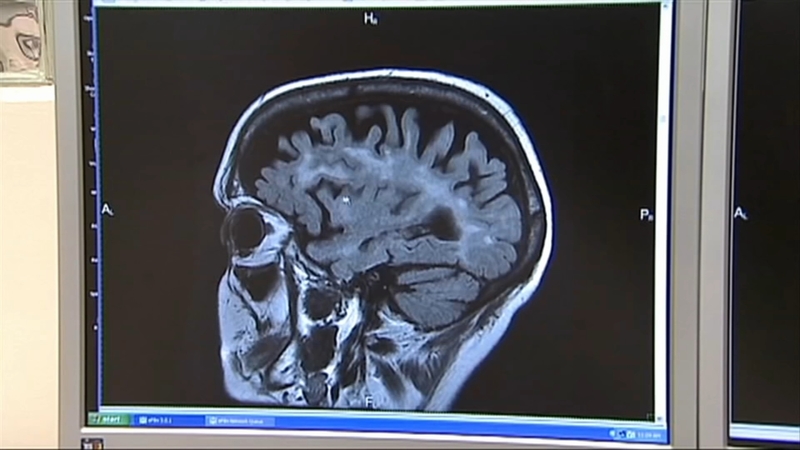 HOCKESSIN, Delaware (WPVI) -- Diagnosing and treating concussions are one of the most debated topics in medicine, for adults or children.

These head injuries aren't limited to sports; they can occur anywhere.

Experts say the recovery involves the doctor, parents, AND the young athletes.

15-year-old Lake Grant loves a challenge, whether in games with his family, or his favorite sport - lacrosse.

For the past 6 months, his challenge has been recovering from not one, but two, concussions.

The first was in April during practice:

"I got the ball. and then I was with like 3 bigger guys, and they just sandwiched me for the ball. And I was on the floor for a second," he recalls.

"It was kind of like a flash of light," he continues. "It's that quick flash, you're like dizzy for a second. And then it was like, - all right, I'm okay."

But a week later, he was at the doctor, just not feeling right.

"He did a couple of eye exams and he said my eyes were fluttering. And that's how I knew I had a concussion," Lake recalls.

Dr. Emelynn Fajardo, a sports medicine specialist at Nemours duPont Hospital, compares concussions to a computer virus, but in the brain's software.

The more you push, the more symptoms mount, such as headaches, dizziness, nausea, problems with memory or concentration, or "not feeling right."

And she says you only need 1 symptom to be concerned.

Dr. Fajardo says symptoms may show right away, in a few days, or up to a week later.

And they can show up after physical activity, or mental activity, depending which circuits have been injured.

Treatment used to mean - no school, no physical activity, no electronics, and a dark room for weeks.

"We started to realize over the years that "this is a little too much decrease in their activities, and maybe it's a little over the top," she notes.

Doctors noticed that students who were heavily restricted became more socially withdrawn and had darker moods.

Then studies compared total shutdown versus returning to light activity after 24 hours.

"There was no difference," Dr. Fajardo notes.

So guidelines changed in 2016.

There were actually 3 students in his class with concussions.

His English teacher made a special effort to help him recover.

"She knows like, I like to work. She took my computer from me and she wouldn't let me use it, just so I would feel better," he says with a grin.

"She's like, 'Your health is more important than any of these papers,'" Lake says, acknowledging the eye-opening moment.

Lake had nearly recovered from his first concussion when he got his second.

"I was walking through the gym to get to my next class. and I got hit right on the side of my head with a medicine ball," he says.

"I felt that flash, and I was like, oh, here we go again," Lake continued.

For him now, reading can bring on symptoms.

"The pages would get kind of like blurry," says Lake. "I'm reading Frankenstein now, and if I read for more than an hour, I start feeling dizzy."

But he knows to stop, and not risk lasting brain damage.

He says some kids are too focused on grades, and not their own health.

"I'd rather feel good as a person, then let some of my grades go, than mess up my brains."