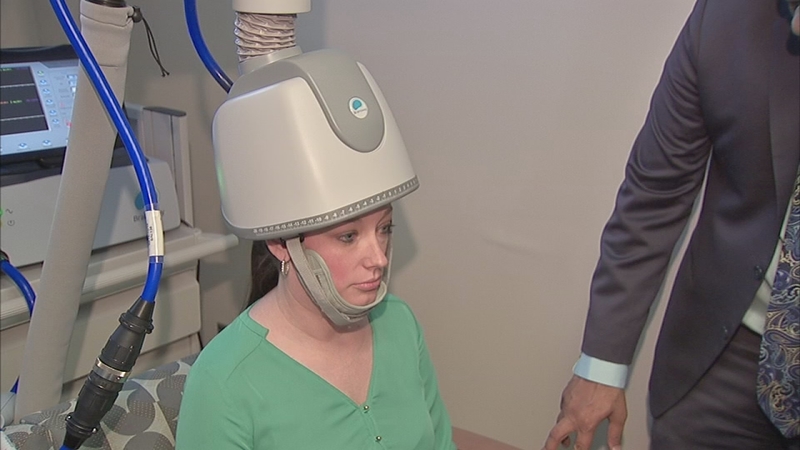 Depression first came into Tina Thurston's life at 17-years-old, though not with dark moods.

"A lot of stomach pain, like irritable bowel, a lot of migraines that would, make me throw up," she said.

Over the years since, Tina has taken a host of medications. But one by one, the drugs failed.

"They would work for a couple months and then I'd feel bad again," she said.

"I try to describe it to people as carrying 10-pound weights on your arms and legs," she continued.

During a difficult episode last winter, Tina and Dr. Mehta decided to add TMS - transcranial magnetic stimulation. It was approved by the FDA 9 years ago.

"It's a pad that goes over the left side of your brain in the frontal lobe," said Dr. Metha.

Magnetic pulses stimulate the brain and doctors believe that boosts activity in areas connected to mood control and depression.

Belmont is now using an improved version of TMS, the Brainsway helmet.

About twice as deep as with the old pad.

The recommended protocol for Brainsway is for 20, twenty-minute sessions, 5 days a week.

"You're awake, you are sitting in a chair like I'm sitting in right now. And you can drive in or come in by yourself, have the treatment done, and then drive back," says Dr. Mehta about the ease of using Brainsway.

"It improves the connections to these other areas of your brain, which are responsible for your energy and appetite and your sleep and you motivations and interests," he adds.

By increasing those connections, it almost "resets" the frontal portion of your brain.

Tina had a funny sensation and mild headache a few times, but after a while...

"I started to bring in books and just read during my treatment," she said.

"I think, is this how normal people feel, you know?" she said.

Dr. Mehta says nearly 70% to 75% of patients get a response with the Brainsway helmet.

It's a potential treatment for pregnant women or nursing mothers, who don't want to take medications, or patients such as seniors already on drugs for other medical problems.

"They're probably already on 5 or 10 medications from their primary care doctor," he says, adding, "We add another 2 or 3, and then they have drug interactions."

Dr. Mehta says older people have a slower metabolism, and can't break down the medications, and, "They probably have a lot of side effects or potential for falls."