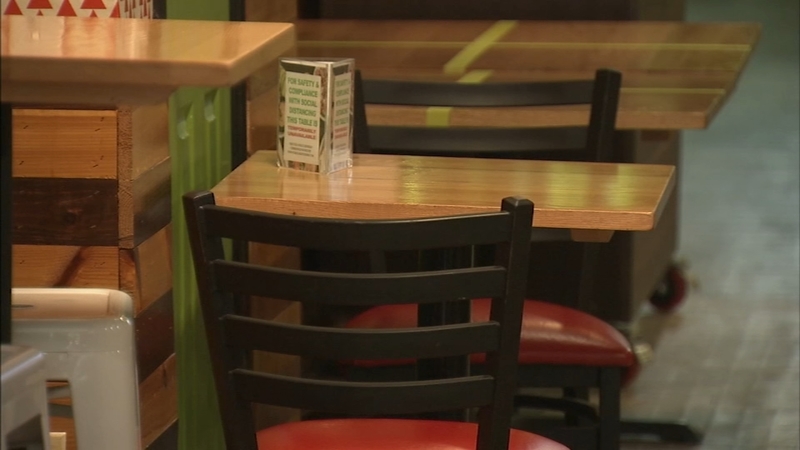 PHILADELPHIA (WPVI) -- Philadelphia health officials said Tuesday they have postponed the start of indoor dining in the city to no earlier than September 1. The previous date was August 1.

The news comes as Health Commissioner Dr. Thomas Farley announced 142 additional confirmed cases of COVID-19 in Philadelphia on Tuesday. That brings the number of confirmed cases to 29,945.

"There was, in the back of my head a little thinking, just maybe but, quite frankly, I don't even think in September they are going to allow us to open up," said Steve Vasiliadis, co-owner of the Bodega Bar and Kitchen.

Vasiliadis said this go around he didn't overstock on extra food, sparing the extra cost and waste.

He says like it or not, if this keeps up, the city's outdoor dining landscape will soon look different.

"We can only go so far, you're going to see a lot of closures," said Vasiliadis.

"I'm worried about winter and fall. If we're in the same boat and it's November, that scares me," she says.

While there's been talk in industry of defying city orders, Safran says for her part, it's not worth the risk.

"There are rules, we have to follow them, and me personally, I have to hope that they're doing what's in the best interest of everybody," said Safran.

The city reported no new deaths on Tuesday, but Farley said the city is in its second wave.

"We are recommending people not participate in gatherings of any size," Farely said. "And when you are around your relatives, you should wear a mask."

There will be no indoor dining in Philadelphia until at least after September 1.

He said health department staff will call people who have tested positive for COVID-19 and ask them to isolate. Staff will ask for the names and contact information of anyone that they've had close contact with.

Workers will then call the contacts and inform them that they may have been exposed to the virus, and ask them to quarantine for 14 days. Staff will then follow up with the contacts every day to see if they have symptoms or any outstanding needs.

To facilitate the process, health officials have hired 108 people to build the new division.

Since July 6, officials said they have attempted to contact 554 cases and completed interviews with 53% of them. Of those cases who reported contacts, contact tracers have reached and interviewed 72% of the contacts.