There have been eight cases of the UK variant in New Jersey, one fatal.
WPVI
By Katherine Scott
NORRISTOWN, Pennsylvania (WPVI) -- A 30-year-old Montgomery County bartender with no travel history is among the individuals in the tri-state area to test positive for the coronavirus variant first detected in the United Kingdom.

The first documented case of the variant, called B.1.1.7, in Montgomery County was announced Wednesday by Commissioner Dr. Val Arkoosh.

The 30-year-old works at a county bar and restaurant. According to the bartender, the restaurant has had multiple COVID-19 cases in staff members going back to November 2020. Officials would not name the restaurant or say where it is located in the county.

The bartender started showing symptoms on January 13, according to Arkoosh.

The bartender tested positive this week for the U.K. variant, after first testing positive for COVID-19 on January 15.

In recent months, variants have been identified in the U.K., South Africa, Brazil and in the U.S. Health officials say there's good evidence the U.K. variant is more transmissible, spreading more easily and more quickly.

"The individual has no travel history. So this is just a reminder that it is quite likely that this more contagious U.K. variant is here in Montgomery County," Arkoosh said.

The bartender worked a double shift the day before symptoms began, Arkoosh said.

Arkoosh said the county's Office of Public Health completed contact tracing on January 25, the next day after being notified the individual had tested positive for the U.K. variant.

"If you needed another reminder to be careful in terms of wearing a mask, keeping your hands cleaned, and watching your distance from others, this is certainly the wake up call to do so," Arkoosh said.

A variant of COVID-19 that was first identified in the United Kingdom has been discovered in a woman from the Philadelphia region.

Health officials said a woman in her 50s, who lives in both Philadelphia and Bucks County, was found to have the U.K. variant earlier this month.

She became sick at the end of December. She was briefly hospitalized and is now recovering. She had contact with someone who became infected after traveling to England.

Four cases are in Ocean County, two are in Morris County, and two others are in Essex County.

One of the New Jersey cases was fatal, though Health Commissioner Judy Persichilli noted that person had significant underlying conditions.

Persichilli said one case involved a man in his 60s from Ocean County whose symptoms have since resolved. She added that he had no history of travel.

Another case involved a child who stayed in northern New Jersey and had a history of traveling. The child tested positive in New York earlier this month. State officials are working with their New York counterparts on tracing contacts.

So far the vaccine still works against new variants, but studies show it is less effective against the predominant variant in South Africa.

Penn Medicine researcher Dr. Drew Weismann, who pioneered the mRNA technology being used in the vaccinations, said vaccines can be changed in about six weeks to adjust to new variants, if necessary.

"It's literally plug and play. Once you have the sequence of a new variant, you put it in the exact same RNA that the original virus was from and you made a new vaccine," explained Dr. Weissman.

Weissman said the thing they don't know is what the FDA would decide, meaning an extension of authorization or requiring additional clinical trials which would take more time.

The U.S. added a second COVID-19 vaccine to its arsenal Friday, boosting efforts to beat back an outbreak so dire that the nation is regularly recording more than 3,000 deaths a da 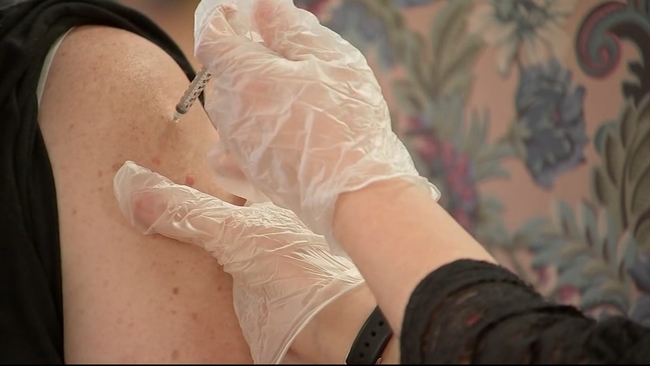