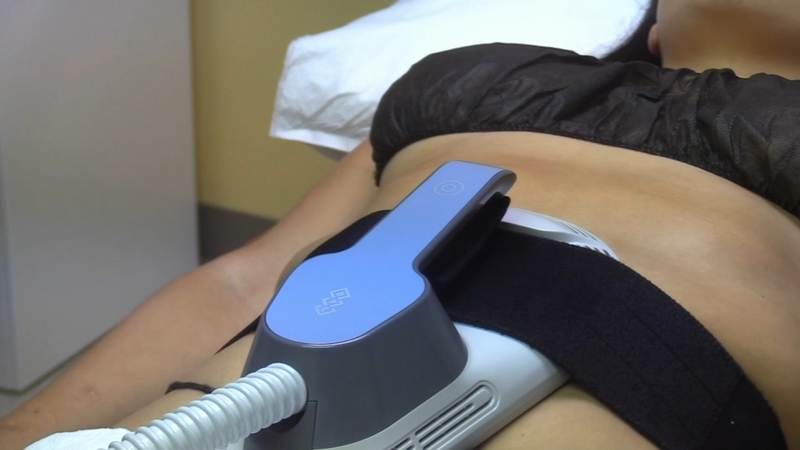 LANGHORNE, Pa. (WPVI) -- There have long been ways to eliminate body fat - such as liposuction, and targeted devices that heat or freeze fat cells.

But exercise alone has always been used for building muscle. A new machine on the market promises to do both at the same time.

"Until I was diagnosed with a pituitary tumor, so I abruptly put on about 35-40 pounds within one year," says Morgan, of Bensalem, Pa.

She lost some with diet and exercise but hit a plateau.

So she decided to try a new procedure - Emsculpt - to reduce her abdomen.

"This works by contracting the entire muscle fiber," says Dr. Richard Goldfarb, of the Center for SmartLipo in Langhorne, Pa., says even in intense workouts, muscles only contract 17 to 24 per cent.

"You're getting about a 92 to 95% muscle contraction. No human being is able to contract their muscle like that," he says.

"Sort of out-of-body, because you realize you don't have control over your muscles," she notes.

She felt the effects in her core, even after the first of the 4 recommended treatments.

And it's been good incentive to keep up regular workouts.

"There's no excuse to fall off now," says a determined Morgan.

Peter Vernacchio tried it after seeing his brother's results.

"He actually had a 6-pack, and before, I'd never seen that on him. And he works out a lot," Peter says.

He also believes it's firming his abs, beyond his daily workouts.

"The first time, i didn't think it did anything, but a day later, my abdominal muscles were really sore," he recalls.

Dr. Goldfarb, who took part in the clinical trials for Emsculpt, says the improvements continued for 6 months after the final treatment.

Dr. Goldfarb says he and his fellow clinical trial doctors will soon publish all the results from their 6-month follow-ups.

And they'll be check patients at 9 months, 1 year, and then to at least 18 months after treatments to make sure the results are long-lasting.

Patients still need to keep up with their exercise and healthy eating.

Dr. Goldfarb says Emsculpt is a short-cut to body improvement, but not a free ride.