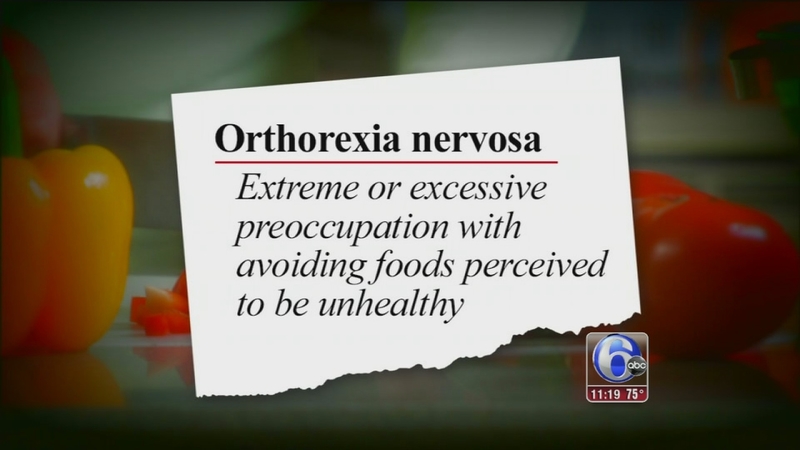 PHILADELPHIA (WPVI) -- It's certainly beneficial to eat healthy, but can eating 'clean' become an obsession? Some say it can.

The bigger problem is the obesity epidemic, but for some people, we're seeing the opposite extreme - people becoming preoccupied with only eating certain healthy or organic foods.

It's a new type of eating disorder. It is rare but experts say they're keeping an eye on it.

More than two-thirds of Americans are overweight or obese, eating lots of high sugar and processed foods.

But there is also a growing trend of the opposite, more people seeking out healthy, clean foods.

Lisa Montgomery started eating clean 25 years ago, well before it became trendy. She follows and writes about eating raw.

But David Sarwer of Penn Medicine says some people can take eating clean too far.

It's not an official diagnosis, but it's called 'orthorexia nervosa' meaning extreme or excessive preoccupation with avoiding foods perceived to be unhealthy.

"So that may be eliminating fats and carbs or eating organic foods, but really that becomes a focus if not an obsession of how they eat," Sarwer said.

He says it can also include being overly concerned about food contamination or artificial chemicals.

Registered dietitian Adrianne Delgado says she's seen the disorder in teenage girls. It's more about eating pure than losing weight, but weight loss can be one sign of the problem.

"A lot of the times, they're eating all throughout the day. But when you quantify the calories, they're only eating 700 to 800 calories a day because their choices are so limited," Delgado said.

Other signs include becoming overly upset if certain foods aren't available or if it's disrupting daily life.

"Are they to the point where they won't let certain foods come into their house or they will refuse to go to socials gatherings unless the right foods are there," Sarwer said.

Orthorexia is very rare, but we could see more cases as more healthy eating diets pop up. Delgado says treating someone involves a doctor, psychologist and nutritionist.

As for who is most at risk, experts say women and possibly people who have had weight loss surgery and have drastically changed their diet.

But again, it's not an official diagnosis. Some experts say they've never seen it. Others say they're only now learning more about it.
Related topics:
health & fitnesseating disorders
Copyright © 2021 WPVI-TV. All Rights Reserved.
TOP STORIES
Soccer fans accused of beating man to death at Pat's King of Steaks
Girl, 6, hit by vehicle while fleeing Philadelphia gunfire
Video shows Gabby Petito's Utah police encounter before disappearance
AccuWeather: Not as hot, some downpours today
4 treated, including firefighter, following rowhome fire in Manayunk
1 in 500 Americans have died of COVID since 1st US infection
Primark opens at Fashion District Philadelphia
Show More
SpaceX launches 4 amateurs on private Earth-circling trip
Age-progression picture shows what missing NJ girl may look like today
4 young people shot in past week have ties to one school
98% of those who died from COVID this year in Philly were unvaccinated
DNA evidence helps Philly police make arrest in 2007 cold case murder
More TOP STORIES News