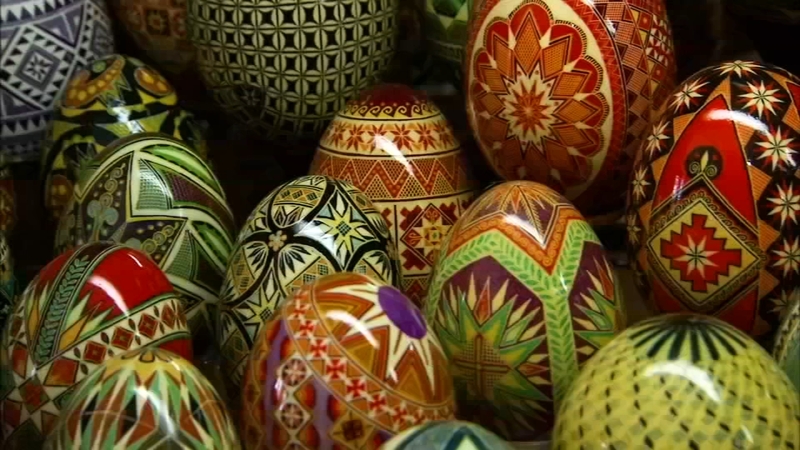 SHOEMAKERSVILLE, Pennsylvania (WPVI) -- Helen Badulak says she started teaching herself the art of pysanky around 1970.

"It's a wax resist method of applying lines," she said. "My canvas is a real eggshell."

She says when it comes to crafting the eggs, "practice makes perfect."

Over the last 50 years, Badulak has become a master craftsman of Ukrainian Easter eggs.

"I tried to do about one egg every three days," she said. "I have used all kinds - from the smallest, which I used finch, to the largest which was ostrich."

Badulak was born in Ukraine, but spent her youth in Germany before moving to the United States when she was 12.

Creating the design is a process.

"Everything you want white you cover with wax, and you move from lightest to darkest dye colors," said Schaeffer.

The wax is then melted off to reveal the design on the egg.

The design Badulak recently worked on featured triangles, which she says represents "the holy trinity."

Badulak's daughter and granddaughter learned from watching her. Her daughter, Nina McDaniel, describes pysanky as "just a fun thing to do."

Each egg tells a story.

"The colors have meanings and also the symbols," said Badulak. "Yellow spirituality, white for purity."

"She's really good at putting designs together," McDaniel said of her mother.

"A deer would stand for wealth and prosperity. The birds were for peace," said Badulak.

Badulak says if you receive an egg, or pysanka, it brings luck, love and peace.

"I wanted people to know about Ukraine. We love everybody, and we love to share things," she said. "I do love doing it."

Purchasing the family's pysanky is by appointment only through their Facebook page.