Over 100 pets flown into Delaware to escape Hurricane Dorian 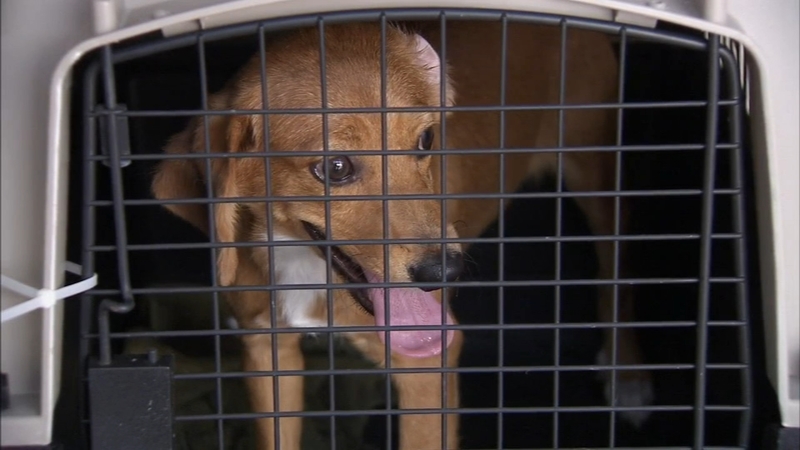 Over 100 pets flown into Delaware to escape Hurricane Dorian

NEW CASTLE, Delaware (WPVI) -- On Tuesday afternoon, a plane arrived at the New Castle Airport in Delaware carrying over 100 pets from South Carolina.

The plane was filled with 191 cats and dogs who were living in shelters on Hilton Head Island.

The pets were up for adoption there, but the shelters they were living in were at risk for flooding from Hurricane Dorian, so these animals were flown in on a rescue airlift by Wings of Rescue, with support by GreaterGood.org and the ASPCA.

"We've done multiple hurricane evacuations, and every single time I get goosebumps," said Linda Torelli, the marketing director with Brandywine Valley SPCA. "That plane opens up, and it is such a thrill to be able to help hundreds of animals, save their lives and find families."

Dozens of volunteers lent a hand transporting 173 animals off the plane. The plane continued onto Maine to transport 18 cats. One by one the animals were carried out of the plane in their crates and into vans that would take them to animal shelters in the area, around Delaware, Pennsylvania, and New York City and also up to New England so they could find a forever home.

"These animals were strong adoption candidates in their local shelters," said Torelli.

Sheryl Blancato drove her van down from East Brookfield, Massachusetts, to pick up 20 cats to take back with her to Second Chance Animal Services.

"They look great, we had one there that looked like it had a little motion sickness, but everybody else looked good," said Blancato.

With the shelters the animals came from cleared out in South Carolina, they can now be used to house family pets who may need assistance after the storm hits.

"It's really an inspiring event, and it's full of great energy," said Walter Fenstermacher, the senior director of operations with Brandywine Valley SPCA.

There will be 158 more pets being driven into Delaware Tuesday night from Jasper County in South Carolina, according to Torelli, who said they will be placed in local shelters around Georgetown. Torelli said you can help these animals out in many ways, by either donating to the Brandywine Valley SPCA, bringing wet dog or cat food or by adopting a pet.

Pets should be available for adoption as early as Wednesday.