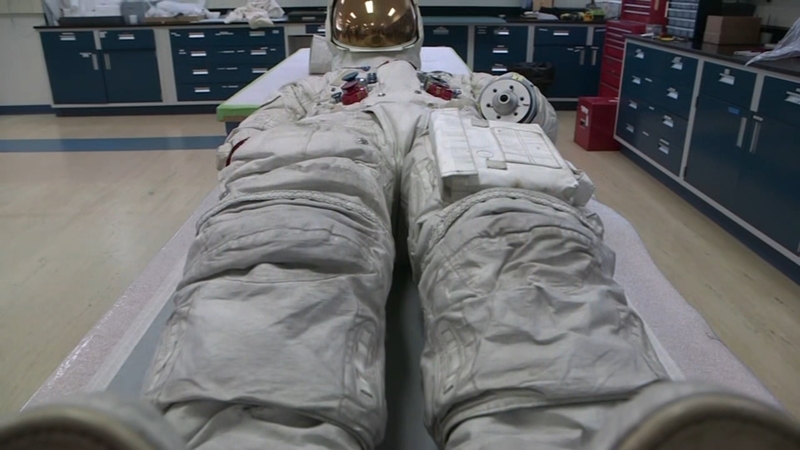 DOVER, Delaware (WPVI) -- Company officials and workers gathered in a large building that is part of ILC Dover's sprawling manufacturing plant in Frederica, Delaware. The event celebrates the 50th anniversary of the Apollo 11 moon landing, the subsequent walk on the moon and role the company played in the historic events.

In the 1960s, the Delaware plant built the space suits used in NASA's Apollo program. Two of those suits were used by Neil Armstrong and Buzz Aldrin the first men to venture on the moon's surface.

There were other space suits made in the 1960s. What set apart the ILC suits were special flexible joints in the arms and legs. That allowed astronauts to walk, bend, even hop on the moon. Bill Ayrey who is with ILC Dover said, "The ILC suit provided great mobility and also protects against radiation and micrometeorites."

The warmest applause today for 30 to 40 retirees invited to attend the anniversary event. They are members of the company's Apollo group. The men and women who painstakingly designed and put together the Apollo suits.

Seamstress Ruth Ratledge said there was no room for error in the work. If there was a reject, she said it was destroyed and new pieces would have to be recut.

After watching the fuzzy gray live TV images of Armstrong and Aldrin walking on the moon in July of 1969, Ratledge told us, "I said, well we made it, we had been a part of that."
Report a correction or typo
Related topics:
careersdovernasamoondelaware newsmoonwalkmoon landing 50th
Copyright © 2022 WPVI-TV. All Rights Reserved.
TOP STORIES
AccuWeather: Sunny & Pleasant Sunday
Pottstown community grieves over loss of family in house explosion
Multiple shootings kick-off violent Memorial Day weekend in Philly
Visitors fill the Jersey Shore for Memorial Day weekend
Father faces charges after 4-year-old accidentally shoots himself
President Biden delivers commencement speech at Univ. of Delaware
Crime Fighters: Who killed Anwar Upchurch?
Show More
One man dead after West Philadelphia shooting
'Is it worth my kid?' Parents of TX school shooting victim speak out
Official admits police made 'wrong decision' in TX shooting
Victim of elementary school attack says it could have been prevented
North Philly store owner robbed, assaulted with brick: Police
More TOP STORIES News