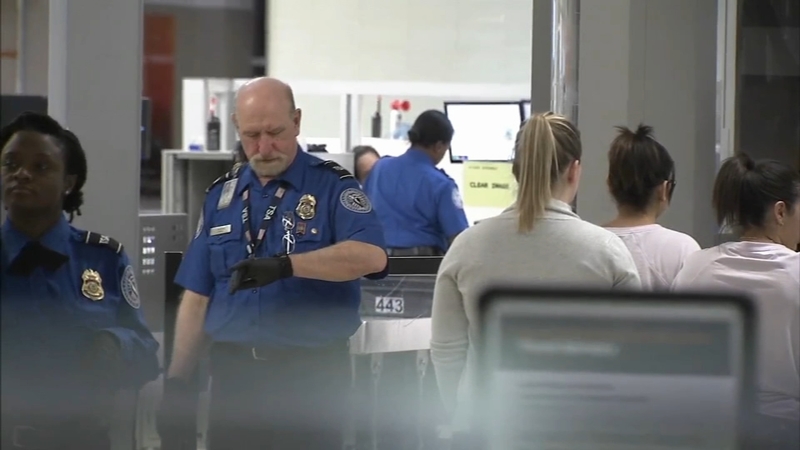 PHILADELPHIA (WPVI) -- Government offices and programs are finally, and slowly, going through the process of reopening following the longest government shutdown in United States history.

President Trump signed legislation providing funding for three weeks, but it does not include the president's request for $5.7 billion for a border wall.

The president says he could still declare a national emergency, bypassing congress to build the wall.

Among the workers impacted by the partial government shutdown were TSA agents. The agency reported an increase in sickouts over the 35-day shutdown, as many workers could not afford to go to work without pay.

LaShanda Palmer has been a TSA officer since 2002. She is a mom of five and has been through government shutdowns before.

The latest one has been the hardest, because it's the first that caused missed paychecks. Since December 22nd, she as an essential government employee has been working at Philadelphia International Airport without seeing a dime.

"In the beginning it was really bad, but then the passengers is what changed us. They come in and they are so grateful that we're there. They are so giving so compassionate so understanding," Palmer said.

That includes reviving donations for local food banks. Palmer, like so many others, had to cut back.

Now that an agreement has been reached to fund the government for three weeks, she should receive a check. All the money will be going to past due bills.

However, when she'll get the paycheck is up in the air.

Palmer says she is relying heavily on her church family for prayer. She knows other officers who have had to sleep in their cars and have received eviction notices, and can't imagine what will happen if the government shuts down again in February.

Independence Hall was humming with visitors, and people were once again crowding in to see the Liberty Bell.

These historic tourist spots were closed for most of the government shutdown as they are operated by the National Park Service.

Rachelle Doyle and her dad planned their trip to Philadelphia months ago, flying in from California.

"As far as the TSA, you're feeling so bad for them and the conditions that they were forced to be in. We're just glad that it's opened up today," Doyle said.

Local businesses felt a squeeze on their pockets too.

"I usually get a lot of my business from the Liberty Bell, and since it was closed nothing was happening. It affected a lot of people, actually - from the hotdog carts to all the restaurant around here," said tour guide Christine Paluba.

Tourists and small business owners are hopeful that the president and congress can reach an agreement before the February 15th deadline. It's especially important during these cold winter months when there aren't as many visitors, and everybody who comes out really counts for the small business owners.