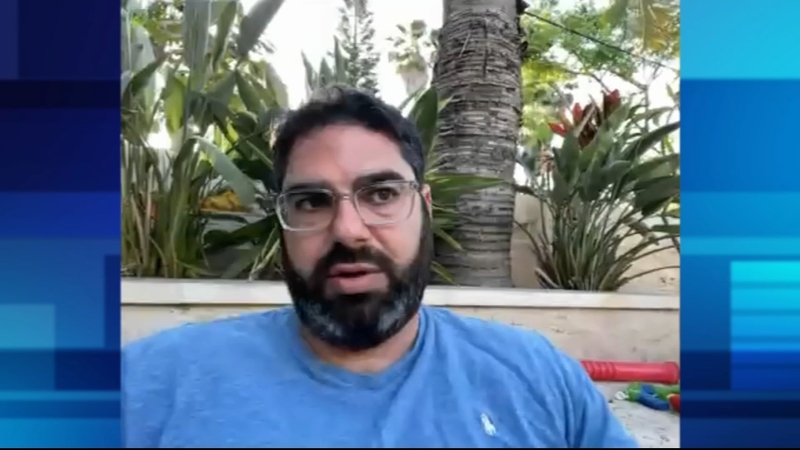 NARBERTH, Pennsylvania (WPVI) -- Palestinians and Israelis are locked in a days-long battle that has been getting more violent by the hour.

As destruction and deaths mount on both sides, Action News spoke with a local man now caught in the middle of the fighting.

"We would just hear the pops go off, quite a lot of them," said Geller.

Sadly, he says the area has grown accustomed to the violence.

"Every home here has a bunker room that you can go into. You hear the alarm and you have about 90 seconds to get in there," said Geller.

Rockets streamed out of Gaza and Israel pounded the territory with airstrikes.

Dozens have died and even more have been injured. The chaos began during the Muslim holy month of Ramadan, when there was a clash between Israeli police and congregants of a mosque in Jerusalem.

"There are a lot of rockets that have been sent over but like I said, about 90 percent of them have been shot down," said Geller.

Leaders with the Jewish Federation of Greater Philadelphia are keeping a close eye on the conflict.

"None of this should be happening and it is all very unfortunate. We are over here, seven hours behind, trying to keep up with our family over in Israel," said Steven Rosenberg, Chief Operating Officer Jewish Federation of Greater Philadelphia

Rosenberg fears things will get worse before they get better.

"This is really bad. They are considering ground troops, which would not be good for anybody. Ground troops will exacerbate the problem and also many more casualties." Said Rosenberg.

CAIR, the Council on American-Islamic Relations, says the violence on both sides is disappointing.

"You would think that after so many wars both sides would learn that there is no military solution to this conflict. The conflict can only be ended by negotiation and mutual recognition between both sides," said CAIR Executive Director Jacob Bender.

It's not clear how long this conflict will last but many are hoping it ends soon before more lives are lost and more cities are destroyed.

"The end result would be for peace for these kinds of escalations not be happening, for us to figure out ways to do this without the violence," said Geller.