After weeks since he was acquired, two road games, billboards and "Beard" T-shirts, Harden finally made his home debut.
WPVI
By Bob Brooks PHILADELPHIA (WPVI) -- The beard is here.

On Wednesday night, the Philadelphia 76ers' James Harden made his Philadelphia debut at the Wells Fargo Center.

Before tip-off, the energy at the arena was something special. It was packed from top to bottom, standing room only.

During warm-ups, barely anyone was sitting except for Harden for a few breaks here and there. Up close he looked as cool and collected as ever.

But there's no doubt things have changed for the Sixers.

James Harden is in the building and looking money. His 76ers home debut begins at 7:30 @6abc pic.twitter.com/U2VJgNAQM6

Fan Mark Hill of South Philadelphia said he's only seen it like this one other time.

"This reminds me when we were in the playoffs deep, back in the Iverson days. It feels good to be like this again. It's like Game 7 or something," said Hill.

As fans were coming in they couldn't stress enough about their hopes for this team with the addition of Harden.

"We've been waiting for this since the process started in 2014. Harden is going to bring us this ship (championship)," said Alex Howard of Audubon, New Jersey

"He's bringing that gel. We're starting to play with cohesiveness. I love it," said Leona Dixon of South Philadelphia.

When you walk into the arena, you'll immediately notice the banners in the front now include their new star. In the team shop, Harden jerseys are the big sale.

On the court, he didn't disappoint in his debut.

His first points came on a drive to the hoop. He was fouled and made the bucket, as well as the free throw.

Shortly after, we saw a patented Harden step-back three. He went off in the first half leading the Sixers with 19 points, putting his full offensive arsenal on display.

He recorded a total of 26 points, nine assists and nine rebounds to lead the 76ers to a 123-108 win over the New York Knicks. 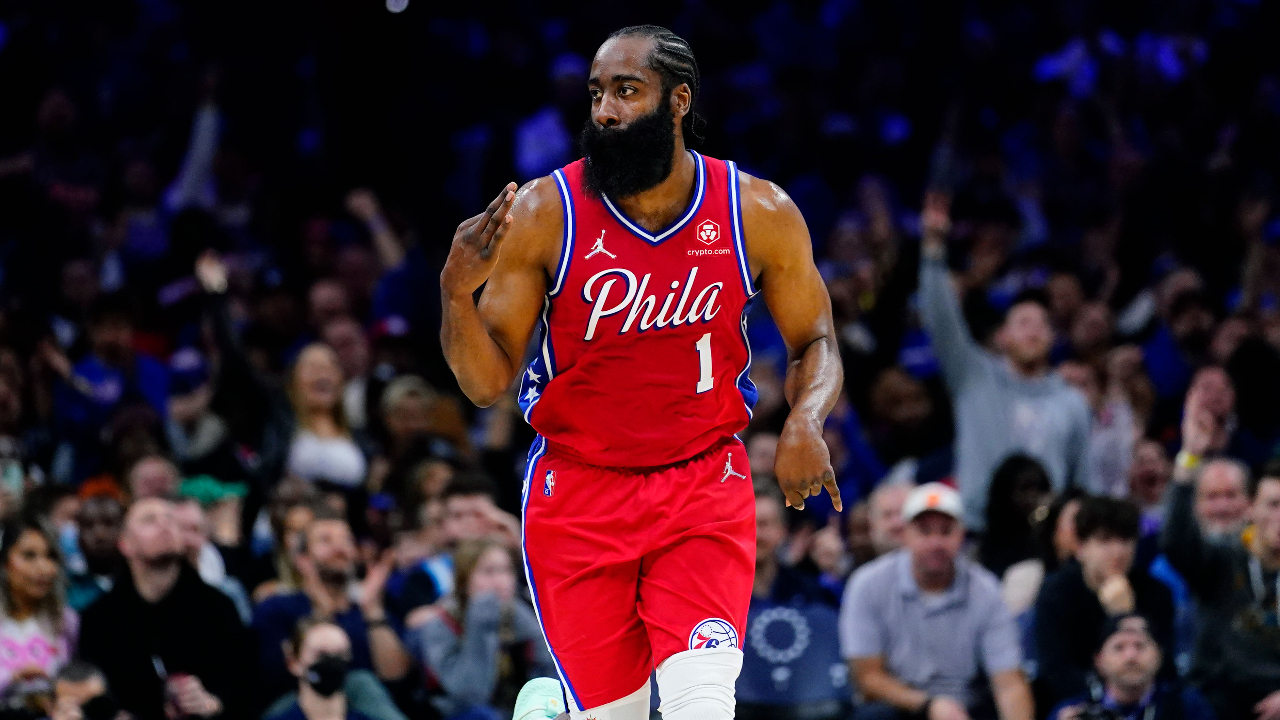 Philadelphia 76ers' James Harden reacts after a basket during the first half of an NBA basketball game against the New York Knicks, Wednesday, March 2, 2022, in Philadelphia.

Though it's a little ways away, some fans are thinking NBA Finals.