James Harden: "Philly was my first choice" even when in Houston

"I just knew for a very long time this is a perfect fit," Harden said.
WPVI 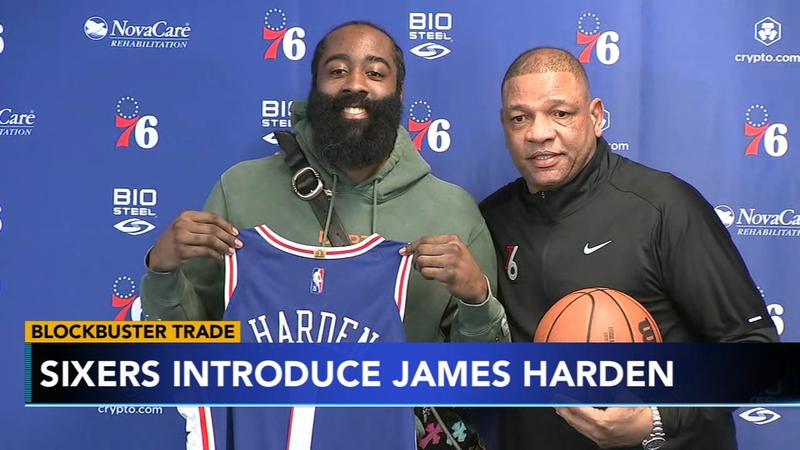 James Harden: "Philly was my first choice" even when in Houston

PHILADELPHIA (WPVI) -- New 76ers superstar guard James Harden said during his introductory news conference on Tuesday he's had his eye on Philadelphia for a long time.

After more than eight seasons with the Houston Rockets, Harden was traded to the Brooklyn Nets just over a year ago.

“HELL YEAH”
I asked James Harden if it’s realistic they have what it takes to win a championship THIS YEAR and that was his answer. “HELL YEAH” pic.twitter.com/mvG5rfrDEJ

Harden said even at that time he wanted to play for the Sixers.

But when asked about how he feels to be in Philly now?

"I just knew for a very long time this is a perfect fit," he said. "You've got a big man - the best big man in the league in Joel (Embiid) - and obviously the coaching. Just from top to bottom it made sense. I'm just happy and blessed that I'm here."

Everyone wants to win and be the last team standing and I’m excited for the opportunity pic.twitter.com/fjbFAJTL92

Harden missed his final four games with the Nets due to a hamstring injury and the first two since joining the 76ers. He practiced on Monday and Tuesday at the team's training center in Camden, New Jersey, and will sit out Tuesday night's home game against Boston and Thursday's matchup at Milwaukee.

Harden is set to make his 76ers debut on Feb. 25 at Minnesota.

"After the (All-Star) break, we'll get things going," he said.

Harden is excited to pair with MVP front-runner Joel Embiid, who is leading the NBA in scoring at 29.5 points per game.

"I think we complete each other," said Harden, who is leading the league in assists at 10.2. "The whole world knows how great Joel has been playing. His presence alone is unbelievable. I feel like I'm the same way as far as making my teammates better, and we have a great core of guys."

"These fans are the best fans in the NBA," he said. "A lot of teams say that. I'm just happy they're on my side and I'm not getting booed. Going to that arena is going to be special."

Harden, who is making $44.3 million this year, said he will opt into his player option of $46.8 million next year to remain with the 76ers.

The Nets traded Harden and Paul Millsap to the Sixers last week in exchange for Ben Simmons, Seth Curry, Andre Drummond, a 2022 first-round pick and a 2027 first-round pick.

Philadelphia's front office is elated to have a superstar to play alongside Embiid.

"Having an MVP and a guy on pace to be MVP if he can keep it up is really exciting," 76ers General Manager Daryl Morey said. "You're looking at pretty long odds if you don't have two great players at that level."

Said coach Doc Rivers: "Being the winner is hard and that's what we want to become and that's why we made trades like this."

Harden's scoring average this season of 22.5 points is done slightly from his career average of 25.0, and he believes he'll bring more than just scoring to the 76ers.

Sixers fans we spoke with on Tuesday are psyched to have Harden in Philadelphia.

So, we had one simple question for them: What are your expectations for the 76ers now that James Harden is on the roster?

Fans react to James Harden's introduction as a Sixer

Brian Conroy of Roxborough says matter-of-factly, "The Sixers definitely have a chance. I mean other than the Suns, I got them as the best team in the NBA."

And Zelda Joachim of Southwest Philadelphia says, "I think it will build up the morale of the team, especially if you have somebody willing to work with the team."

But not everyone is jumping on the bandwagon.

John Senestant of West Philadelphia says, "I do not agree with that trade whatsoever. At all."

Senestant says when you consider James Harden's lackluster playoff performances in the past, and what the Sixers gave up to get him, it just doesn't stack up.

"We shouldn't have traded Seth (Curry). They just made Brooklyn better," he says. "What did James Harden prove through the playoffs? He's not that guy. So, good luck, Sixers. I guess."