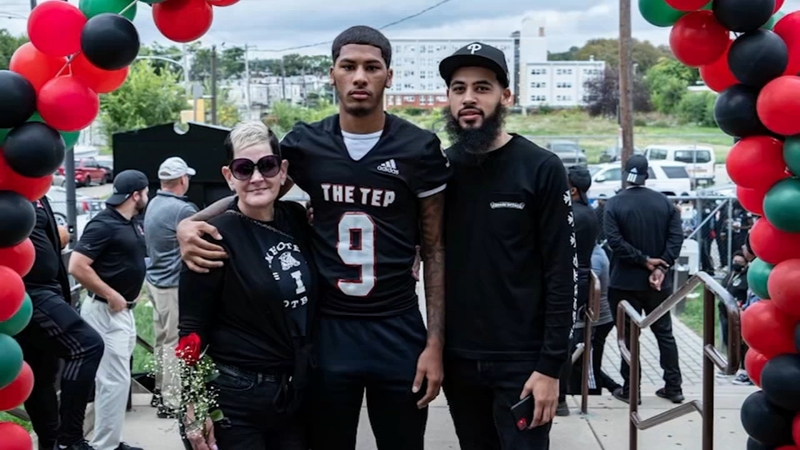 Philly teen beats the odds, will play football at West Point this fall

PHILADELPHIA (WPVI) -- It's a story of resilience. Jamir Reyes' father died, his mom is on disability and he'll say kids from his neighborhood don't go to college. But with the odds stacked against him, he's now the first from his family to go to college

Reyes says he has never forgotten that phone call.

#NEXT on @6abc: His father died when he was 13, his mom is on disability…Jamir Reyes will tell you kids from his neighborhood don’t go to college. Against all the odds, he will be the first in his family to go to college… bound for West Point Military Academy. pic.twitter.com/1J7x82xl0L

The high school senior at Imhotep Charter High School will be playing free safety for West Point Military Academy's football team once he finishes a year at their prep-school.

"It's definitely an honor because, especially coming from where I come from, a lot of people don't get an opportunity to go play there," said Reyes. "When I was 13, my dad passed away. So my mom being a single mom basically, on disability - it's hard for her to provide for us. I was always at the gym or doing football just to get my mind off of it."

Reyes is the first in his family to go to college.

“I cried the first time I came back from the visit because I was like ‘I was really at college.’” From his neighborhood to his family life, Jamir beat the odds. He‘s the first in his family & school go to West Point. He’ll be playing safety once he finishes their prep school https://t.co/iBsq8CX4BT pic.twitter.com/XmvkhHX7IM

"I was hard on him early on. Like hard because I wanted to see how much he really wanted it," said Devon Johnson, head coach at Imhotep. "He showed that anything is possible."

Coach Johnson says Reyes never used his home situation as a crutch or an excuse, but as a motivation to work harder.

"He always had the grades for it, but he had to work at it for the SAT - practicing Monday through Friday, going on Saturdays and Sundays to get SAT prep and tutoring. He will be the first player that we ever have to go to Army West Point," he said. "So that that just kind of shows that not just kids that are in this program, but also kids in the City of Philadelphia and inner cities across the country, that it doesn't matter where you start or where you go through. It's what you want out of this life and the type of work that you're willing to put in."

Reyes says after he did his first visit to West Point, he cried because he couldn't believe that he was actually going there this Fall.
Report a correction or typo
Related topics:
sportseducationfootballcollegefeel goodcollege football
Copyright © 2022 WPVI-TV. All Rights Reserved.
TOP STORIES
AccuWeather Alert: Drenching Downpours Tonight
Officials ID 5 killed in Pottstown explosion; most were children
Official admits police made 'wrong decision' in TX shooting
Victim of elementary school attack says it could have been prevented
Police: Store owner robbed, assaulted with brick in North Philly
Dann Cuellar retires after 34 years at Action News
Another Trenton, NJ firehouse hit by gunfire
Show More
Rainy start to Memorial Day weekend at the Jersey Shore
Bank employees help kidnapped woman after she asks for loan
Massacre survivor says gunman told them: 'You're all gonna die'
4th grader 'did what she had to to survive' Uvalde shooting, aunt says
North Penn holds farewell parade for retiring superintendent
More TOP STORIES News