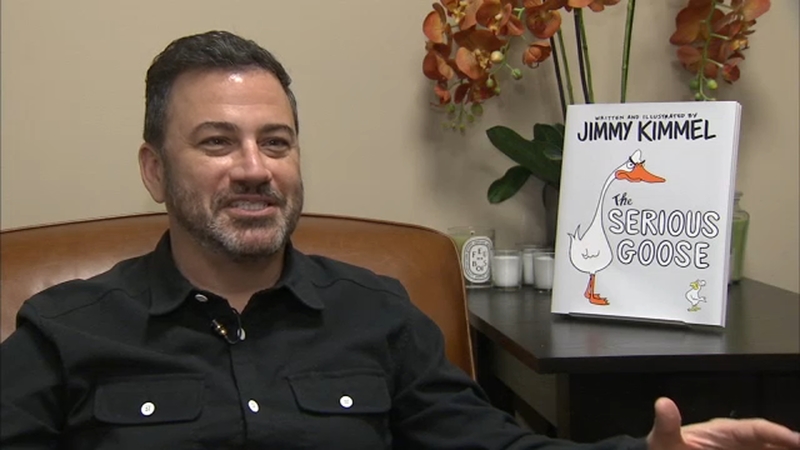 Talk show host Jimmy Kimmel is now an author. He's written and illustrated a children's book called "The Serious Goose." He admits the work was a lot harder than he ever imagined but he's excited the book is already making money. It's all money he's giving away.

"The Serious Goose" is Kimmel's brainchild. It's an original story he wrote. Why a goose?

"It's goose because my daughter, Jane, who is 5-year-old now, when she was in a bad mood, I'd say, 'Are you a silly goose or a serious goose?' And she'd say, 'I'm a serious goose!' So her nickname became Goose. And that's why I chose the goose. And the goal of the book is to make the serious goose silly," Kimmel said.

Kimmel also decided he'd illustrate the book himself -- and do all the lettering by hand! When he was a kid, he wanted to be an artist.

"It was basically me at the kitchen table with a million pieces of paper and a million different pens and ink all over my hands and my wife going, 'Hey, when are you gonna be done with this already?' And I'd say, 'Take the kids out of the house. I need time," he said.

"The Serious Goose" was actually a labor of love. Kimmel is donating every penny he makes from it to Children's Hospital Los Angeles and other children's hospitals across the country. He already knows it's at least $1 million. He's been involved with the hospital from the moment his son, Billy, needed two heart surgeries.

Jimmy Kimmel opened up about his newborn son's heart disease in an emotional monologue on Monday, May 1, 2017.

"They love what they do," he said, "and they need to be funded."

Over the weekend, Jimmy signed books for fans at the Barnes & Noble at The Grove in Los Angeles.

"The Serious Goose" is just one way he gives back, something his parents instilled in him long ago.

"Besides it being the right thing to do, it is one of the most satisfying things to do. And I think it's very important to show that to your kids, to let them see you doing these things and to have them be a part of it, too," Kimmel said.
Report a correction or typo
Related topics:
arts & entertainmentchildrenbookschildren's hospital los angelesjimmy kimmel
Copyright © 2022 WPVI-TV. All Rights Reserved.
TOP STORIES
Boy, 11, suffers burns during bonfire explosion
Relief coming for residents enduring deafening steam plant noise
Son of Philly police officer shot, killed during apparent robbery
Another volatile day on Wall Street. Is it time to worry?
AccuWeather: Back to the 40s Tuesday
Officials ID victim killed in Montco crash; 4 others seriously injured
Mayor Kenney to undergo heart procedure Tuesday
Show More
Getting paid on Venmo or Cash App? New tax rule might apply to you
Philly sees more graffiti during COVID, but artists say it's an outlet
Tax season officially begins. Here's everything you should know
Introducing Millville, New Jersey's first female mayor
Dad charged and fired from job after racist tirade posted on TikTok
More TOP STORIES News