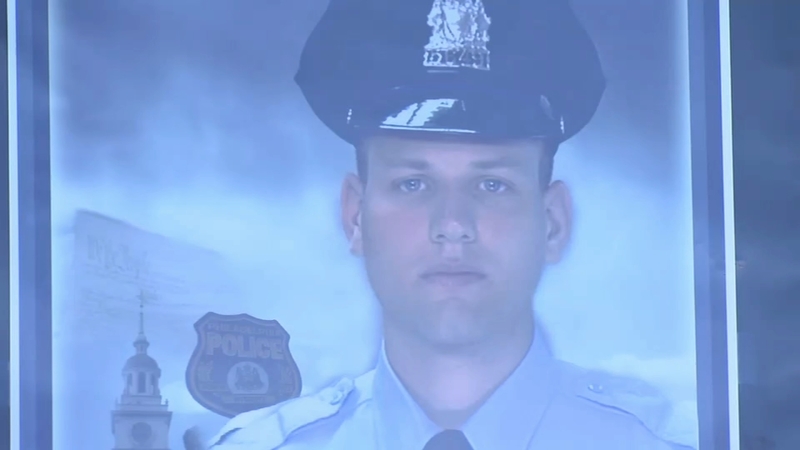 PHILADELPHIA (WPVI) -- For years, his face and name has been visible on walls of the 35th police district, right alongside side other heroes of the Philadelphia Police Department.

And on Sunday, the family and friends of Officer John Pawlowski came together to remember a man who sacrificed everything in the line of duty.

"John was a husband, a friend, a hero he was taken away from us February 13, 2009 at the intersection of Broad and Olney," said Ofc. Robert Hoppe.

Hoppe spoke at a vigil outside the 35th district during a vigil.

Officer Pawlowski was shot and killed 11 years ago as he responded with his partner to a call of a dispute between a cab driver and man with a weapon.

That man, later identified as Rasheed Scrugs, reportedly told the cab driver he would shoot police if they came.

Scrugs, who was also later convicted for murder and is serving life without the possibility of parole, shot Pawlowski above his bullet proof vest. Scrugs himself was also shot.

"I just hope no one ever forgets what he did and the sacrifices that he made for our family and the whole city of Philadelphia," said wife, Kim Pawlowski.

She was also in attendance with her children, including her oldest, named after his father whom she was pregnant with at the time of his untimely death.

"You can't cry every day, but this week it always gets me, February 9 comes around and the anxiety building up for all of the events," she said. "Eleven years have passed, I'm still standing," she added.

His brother and sisters in blue are supportive as ever.

And they are reminded daily of the friend, brother, and hero this city lost far too soon.

"He was a fun-loving guy that everyone wanted to hang out with and party with, but he was a hard worker and he loved being a police officer," said Kim Pawlowski.