LaDontay Bell will join 31 other nominees to attend the 2021 Pro Bowl in Las Vegas.
WPVI
By Christie Ileto 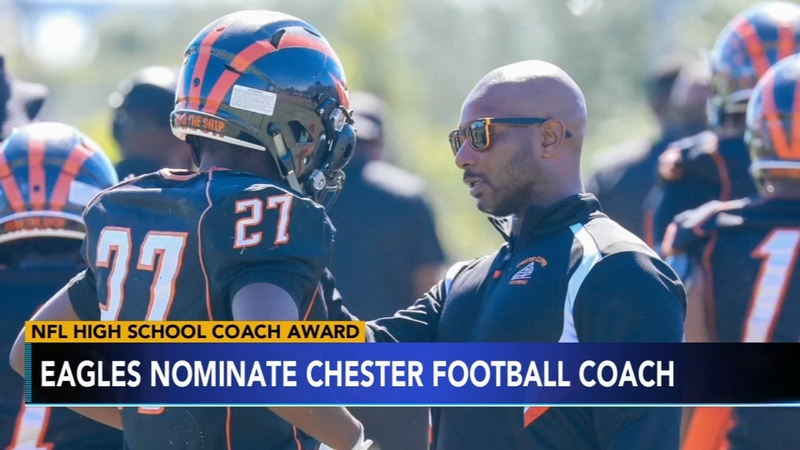 CHESTER, Pennsylvania (WPVI) -- While we're all hoping to celebrate after the Eagles' game on Sunday, the Chester High School football team has reason to celebrate now.

Their head coach, LaDontay Bell, was nominated by the Eagles for 2021 Don Shula NFL High School Coach of the Year.

The announcement came this week. Coach Bell said it's an honor to be nominated for the national award. Under Bell, the Chester Clippers finished with a 7-4 record, making the playoffs for the first time. But it's the lessons he's teaching his students off the field that caught the attention of the Birds.

He and his wife provide bi-weekly meals to the team, who have limited food options, created a special ministry for the players, and was using a van to transport his players to and from school and practice to avoid the dangers of certain neighborhoods.

The van was stolen last year, and he began using his vehicle to ensure his players' safety.

"I believe the mission cannot stop. It has to keep moving forward, and I'm doing the very best I can to make sure that young men get to practice safely. If that means me driving my own truck, that's what I'll do," he said. "I really believe in order to help these young men out, we have to meet them where we are."

Bell said he's been trying to fundraise for a new van and has already raised $10,000.