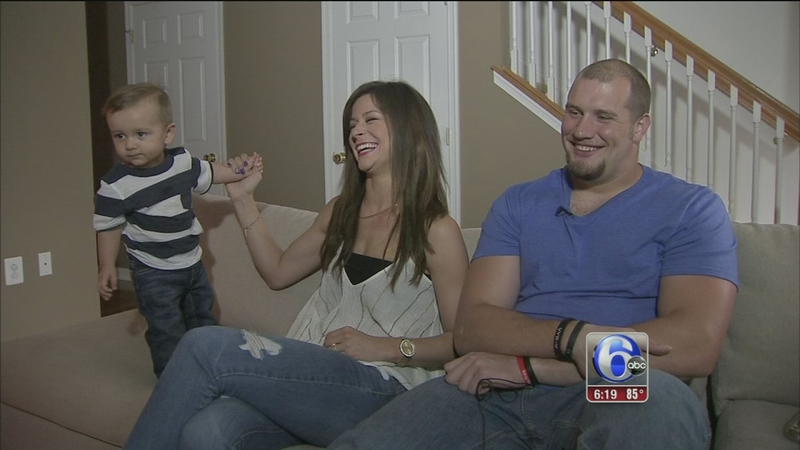 PHILADELPHIA (WPVI) -- Lane Johnson is a baby when it comes to NFL experience. The Eagles offensive lineman has played one year in the long, but he has been forced to grow up fast on-and-off the field.

Johnson started every game as a rookie last year all while starting a family at home.

Johnson's wife Chelsea gave birth to David Chase Johnson last August, the day after his first pre-season game. And it has been life in the fast lane ever since.

"It was real fast paced. Now, I have time to reflect on it, and it's a lot better now that I'm situated and familiar with everything," Lane said. "I feel like I was learning as you go. I feel like it's a true light since having him, just learning to think of somebody else more than yourself."

If a new job and a newborn was not enough, their baby boy was born with clubfoot, a birth defect that Lane was born with as well.

David was in a cast at 6 days old until he had correctional surgery at 3 months.

"They caught it in utero so we knew it was coming," Chelsea said.

At 10 months, David is happy and healthy and so are the Johnsons.

Lane is living his dream as professional athlete.

By the look of it, his son could be playing ball one day, too.

Lane adds, "There are a lot of guys in the NFL that are single, they live lavishly, I feel like it's really nothing if you don't have anybody to share it with."

And they hope to share it with more kids somebody down the road.