Lansdale Borough is stepping up after someone stole bronze markers from the graves at a local cemetery.
WPVI
By Alicia Vitarelli 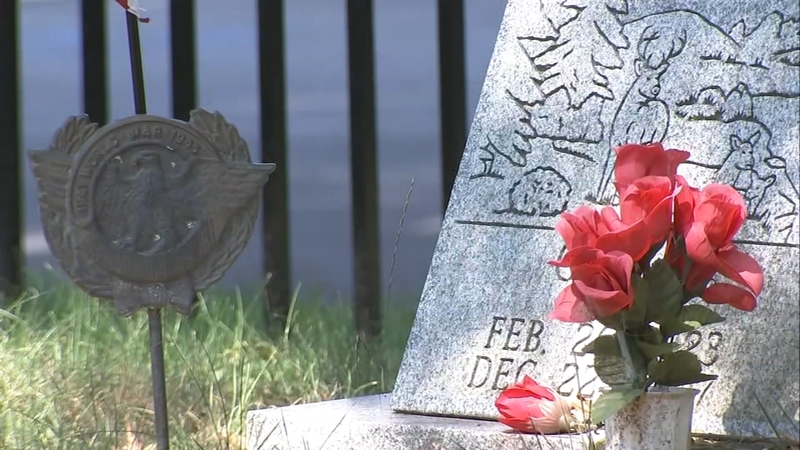 Dozens of bronze markers stolen from veterans' graves in Montco

LANSDALE, Pennsylvania (WPVI) -- A Montgomery County community is stepping up the support of its fallen heroes after someone stole bronze markers from the graves of dozens of military veterans.

There are countless heroes buried at Lansdale Cemetery, from world wars, American Revolution, Civil War, and other battles.

The bronze medallions mark their graves, celebrating their life and their service.

They still don't know who did this, but officials believe the thieves sold the bronze medals as scrap to make a quick buck.

"The medallions have personal identification information about the veteran, where they served, what branch of the military, and the conflict that they served in," said Mayor Garry Herbert of Lansdale Borough.

"They were taking personal history from people, and that's just so wrong and so violating. It's unconscionable," he added.

RELATED: Black WWII veteran who was denied the Purple Heart due to racism finally receives the honor at 99

A member of the historical society noticed about sixty missing markers while doing routine maintenance work.

The thefts occurred sometime between May 31 and July 11.

"They're never going to get that back," said Lansdale resident Lamar Edinger. "It's like an old family album or old pictures, things you treasure."

Lansdale's mayor tells Action News the markers are being replaced thanks to donations from the community.

Sadly, they don't make them in bronze anymore for this very reason.

The cemetery staff says they replace the stolen markers with stainless steel or plastic.