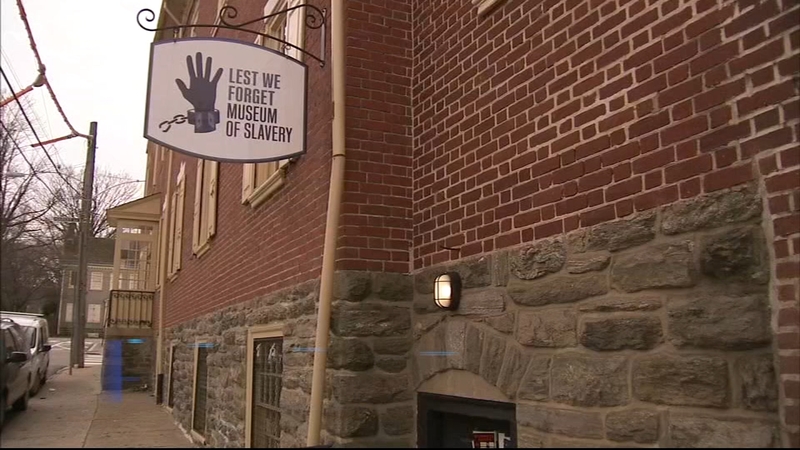 GERMANTOWN (WPVI) -- Gwen Ragsdale is on a mission to share the history of slavery as it relates to the African-American experience through the artifacts featured at the Lest We Forget Museum of Slavery.

She and her husband, J. Justin Ragsdale, founded the museum in 2002 in Port Richmond, but have since relocated it to Philadelphia's Germantown neighborhood.

Gwen says they have the only museum with actual slavery artifacts and visitors won't see a collection like this anywhere else in the Philadelphia area. Her husband started collecting the items in the late 1960s.

She says the first shackle J. Justin collected was found in a trunk belonging to his Great-Uncle Bub who lived in South Carolina. She says that first shackle inspired her husband to want to collect other slave shackles.

"His uncle never said he was a slave, but we suspect that he may have been," said Gwen.

Over the course of 50 years, the Ragsdales have collected a variety of artifacts that are now on display at the museum. Gwen serves as the executive director and museum curator. She also gives tours.

"We review slavery from capture, to emancipation and beyond," said Gwen.

Visitors learn about the voyage from Africa and an enslaved person's experience once they got to America. "Now these Africans are going to be auctioned off for the remainder of their lives," she explained.

The museum takes visitors through slavery and into the Jim Crow era.

"For enslaved Africans, it was an American nightmare that lasted 400 years," said Gwen. "We don't know our history, so that's why we keep repeating it."

The museum also pays tribute to the achievements of African Americans. "It's important that we recognize that we've contributed greatly to American history," said Gwen.

Gwen says she sees a comparison between the Underground Railroad network and the current Black Lives Matter movement.

"We are still working together to free ourselves from the bondage of slavery and social injustice," she said. "Know your history, lest we forget."