In 'Game For Our Lives,' Parkland students fight 'fake news' with claims of 'BS' 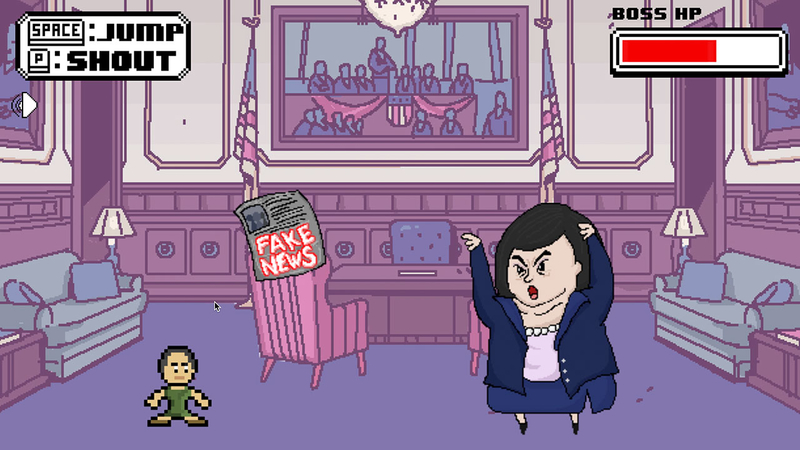 Parkland students star in 'Game for Our Lives'

Ahead of the March for Our Lives event on Saturday, an online game has been released inspired by the Parkland students' mission to change gun laws.

"Game for Our Lives" is a new video game in which players choose to play as Emma Gonzalez, David Hogg or Delaney Tarr, three student activists and survivors of the shooting at Marjory Stoneman Douglas High School that took 17 lives on February 14.

In the game, players first jump over counter-protesters on their way to the governor's office. Once there, they engage in a boss battle with a governor who says that teachers should be armed with guns. The governor throws "Fake News" at the student, while the student throws claims of "BS" back at the governor There are two more similar levels after that.

Upon winning, players receive the message, "Congratulations!!! You changed the gun laws! Join MarchForOurLives.com to make a real change."

March for Our Lives is a student-led initiative advocating for a comprehensive new gun control bill. Students will march in Washington, D.C. and around the world on March 24. Gonzalez, Hogg and Tarr are among the students who have been making media appearances to raise awareness of the event.

U GUYS GOTTA PLAY THIS ITS SO FUN !! I’m a Teeny Tiny Avatar I’m Laughing so hard this is Amazing https://t.co/EZg7cjfo2W

Martins Zelcs, an art director at an advertising agency, said on Twitter that he created it as a personal project.

"We see the game as a tool to create awareness for the march, show support for the movement and celebrate these brave kids," Zelcs told Mashable. "The game arms players with facts to help them refute common pro-gun arguments. It also illustrates how ridiculous the situation in this country is, as kids have to go to the White House and ask to change gun laws because no one is doing it and they're tired of being shot at with assault rifles."
Report a correction or typo
Related topics:
politicsparkland school shootingmarch for our livesvideo gamepeace marchteenagersu.s. & worldstudents
Copyright © 2022 WPVI-TV. All Rights Reserved.
RELATED
What to know about March for Our Lives
MARCH FOR OUR LIVES
TIME Person of the Year 2018 announced
Weapons banned during Trump, Pence NRA appearance
Galvanized by Parkland, teens nationwide organize gun safety town halls
March for Our Lives organizers reveal movement's next step
TOP STORIES
Son of Philly police officer shot, killed during apparent robbery
5 tax changes that can boost your refund this year
2 dead after shooting inside Delaware restaurant: Police
South Philly steam plant operators explain noise frustrating neighbors
Woman finds $3M lottery prize in her spam folder
Grandmother of 5 returning home from work killed in hit-and-run
Justices to hear challenge to race in college admissions
Show More
Kohl's, target of activist investors, gets a buyout offer
Amy Schneider details historic 'Jeopardy' run
4 wounded in shooting in Germany; gunman dead
Andy Reid's Chiefs wins in OT after wild 2 minutes, coin toss
Temple students can no longer only wear cloth masks starting today
More TOP STORIES News