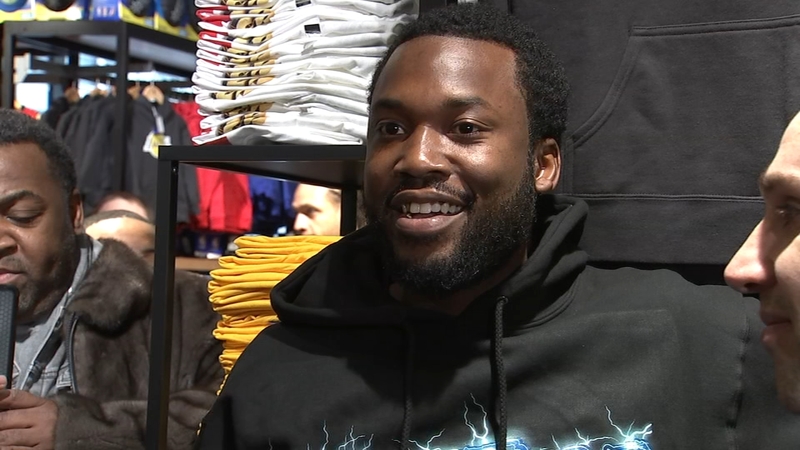 NEW YORK CITY (WPVI) -- Meek Mill and his celebrity friends created a day full of generosity for children in Philadelphia who have a parent impacted by the justice system and incarceration.

The day started with a trip to New York City for a shopping spree at the NBA Store in Manhattan.

Meek Mill met the families at the store along with Sixers partner Michael Rubin and Philanthropist Clara Tsai. They are the founding members of Reform Alliance, an organization working to change probation laws in Pennsylvania and across the country.

They invited families negatively impacted by the criminal justice system to raise awareness but also raise their spirits.


Every child had a parent that has been incarcerated for a technical violation of probation, which means they were sent to prison although they haven't committed a new crime.

Advocates pushing for reform say the current system is too punitive.

Jevell Harris, from Philadelphia's Germantown section, was at the event with his three children. He spent seven years on probation for violations that were not criminal.

It is a topic Meek Mill has lived personally. After spending most of his adult life under court supervision, the 32-year-old is no longer on probation as of August 2019.

Robert Kraft, a founding member of Reform and owner of the Patriots invited the kids and their loved ones to Foxborough, Massachusetts to watch their NFL game.

Kraft sent the team's private charter plane to pick them up. For many, it was their first time on a plane.

This was 8-year-old Cyncere Harris' first time on a plane.

"I've never been on a plane a day of my life because I'm too scared, so right I might seem fine on the outside-- on the inside I'm legit dying inside," she said.

When things settled down, Rubin walked the plane and listened to parents who've been incarcerated, like Dawan Williams.

"I get it, we all have to be accountable for something, but Mike, you're going to give a person more time because he cannot afford to pay you," said Williams.

"We are not stopping until we get the laws changed," Rubin said.

Once they grounded the group headed to Gillette Stadium where they were greeted by Kraft in the team meeting room.

Families from Philadelphia who were impacted by the criminal justice system greeted by @Patriots owner Robert Kraft. He says it’s time to fix the system. Kraft is founding member of @REFORM which is working to change probation laws. @6abc pic.twitter.com/wEHQu66Bby

Next, it was a special vip experience on the field.

"I want the the kids in Philadelphia to know that all of America feels your pain when it's done unjustly. People like myself and a lot of friends and Rubin and Meek going to work very hard to correct this problem," Kraft said.

"For us to get the opportunity to experience something like this-- being flown on a private jet and see people care about us, and give back to us, is something eye-opening and gives you more drive to do something so you can be in a position to get back to somebody," said Ahjanae Williams.

And even though these youngsters are big Eagles fans, they accepted the invitation from the Patriots because they say these issues in the criminal justice system are bigger than sports.